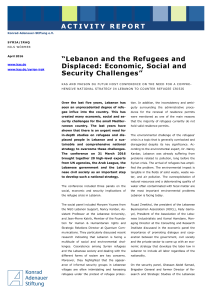 "Lebanon and the Refugees and Displaced"

Conference on the challenges of the refugee crisis for Lebanon

Lebanon has seen an unprecedented degree of refugee influx into the country. This has created many economic, social and security challenges for the small Mediterranean country. On 31 March 2016, Konrad-Adenauer-Foundation and Maison du Futur brought together 20 high-level representatives of the UN, the Arab League, the Lebanese Government and civil society to discuss these challenges and the need for a comprehensive national refugee strategy. 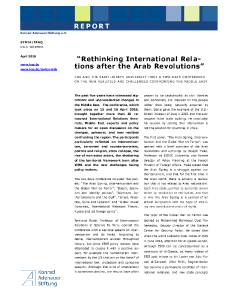 The past five years have witnessed unprecedented changes in the Middle East. The conference, which was hosted by KAS and the Saint-Joseph University and took place on 15 and 16 April 2016, brought together more than 25 renowned International Relations theorists, Middle East experts and policy makers for an open discussion on the changes, upheaval, and new realities confronting the region. The participants particularly reflected on interventionism, counterterrorism, politics and religion, state collapse, non-state actors and a potential shattering of the regional framework born after WWI. 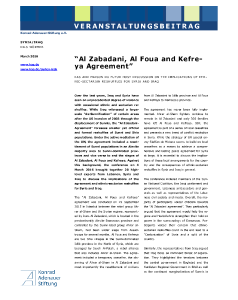 Discussion on implications of ethnic-sectarian reshuffles in Syria and Iraq

Over the last years, Iraq and Syria have seen an unprecedented degree of violence with occasional ethnic and sectarian reshuffles. While Iraq witnessed a large-scale “de-Sunnification” of certain areas after the US invasion of 2003 through the displacement of Sunnis, the “Al Zabadani-Agreement” foresees a smaller yet official and formal reshuffles of Sunnis and Shia. Against this background, the conference on 4 March 2016 brought together 20 high-level experts from Lebanon, Syria and Iraq to discuss the implications of the agreement and ethnic-sectarian reshuffles for Syria and Iraq. 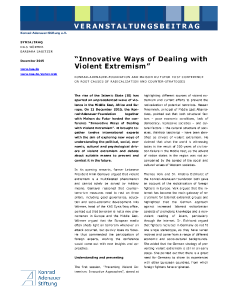 Conference on root causes of radicalization and counter-strategies

The rise of the Islamic State (IS) has spurred an unprecedented wave of violence in the Middle East, Africa and Europe. On 11 December 2015, the Konrad-Adenauer-Foundation together with Maison du Futur hosted the conference “Innovative Ways of Dealing with Violent Extremism”. It brought together twelve international experts with the aim of exploring new ways of understanding the political, social, economic, cultural and psychological drivers of violent extremism and debate about suitable means to prevent and combat it in the future.

20 youth delegates learn about the refugee crisis in Lebanon

Europe is facing an unprecedented refugee crisis. While the influx of large numbers of refugees from the Middle East is a new phenomenon for countries like Germany, Lebanon has been confronted with the repercussions of the Syrian conflict and the unstable situation in the region for years. Against this background, the KAS offices Lebanon and Syria/Iraq hosted a delegation of young German politicians from the CDU-youth movement between 19 and 23 November 2015 to further intercultural understanding and to discuss the refugee situation in Lebanon and the Middle East.

Fouad Siniora, former Lebanese Prime Minister and current deputy head of the Lebanese Future Movement, spoke at the invitation of the Konrad-Adenauer-Foundation (KAS) in Berlin on the political situation in Lebanon and the challenges the country faces as one of the main recipient of Syrian refugees.