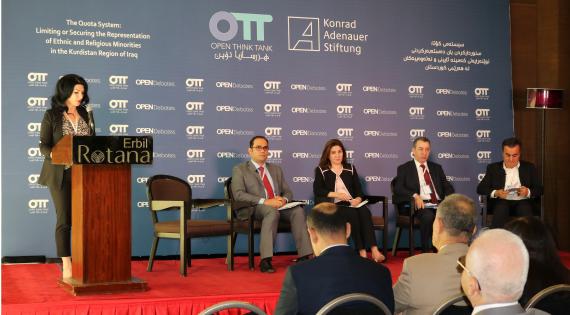 Minority Representation in the KRI

The Kurdistan Region of Iraq (KRI) is home not only to Kurds but also to various ethnic and religious minorities. To date, eleven seats are reserved to Assyrian-Chaldeans, Turkmens and Armenians out of the 111 seats constituting the Kurdistan Parliament. Other minorities are not included in this quota system. With the upcoming regional elections in the KRI, Yazidis and other minorities pushed for a better representation in the parliament. 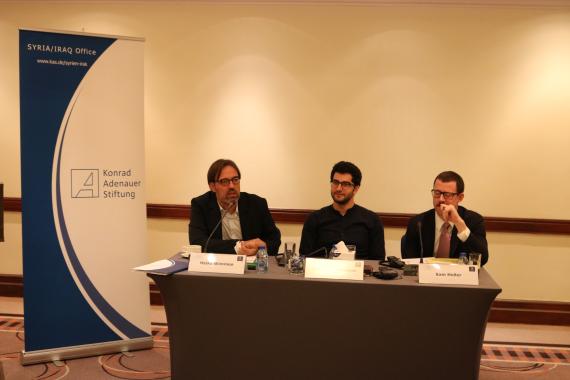 In July 2017, Russia as the most important backer of the Syrian Assad-regime, the United States and Jordan agreed on establishing a de-escalation” in Southern Syria in the Daraa and Quneitra governorates. The ceasefire agreement that has protected south-western Syria for nearly a year is in danger of collapse. Having retaken the last opposition enclaves in greater Damascus and outside Homs, Syrian regime forces are turning south. A military confrontation could have grave implications for the area and lead to a dangerous regional escalation.

The Ninawa province in Iraq is diverse in terms of religion, ethnicity and culture. During the occupation of Mosul by the Islamic State, which lasted more than three years, inhabitants suffered from terror and faced gross violations of human rights. Even after the liberation in 2017 the women of Mosul suffer from post-traumatic stress and have difficulties to re-establish trust in their society. To help and support these women, the Iraqi Institution for Development (IID), in collaboration with the Syria/Iraq Office of the Konrad-Adenauer-Stiftung (KAS), created the first women’s organization in Mosul.

In light of the weak governance in Iraqi Kurdistan the entire governing system is threating to fail. In order to establish good governance and promote legitimization among the civil society, there is a need for reforms especially of the legislature powers. To strengthen the rule of law, the Syria/Iraq Office of the Konrad-Adenauer-Stiftung together with the Middle East Research Institute (MERI) organized two conferences on the subject of nation building in Dohuk and Erbil.

Given the complicated social and political landscape in Iraq – especially considering the divide between Iraqi-Kurdistan and Central Iraq – it is essential to thoroughly train the future generation of Iraqi leaders. This includes gaining the ability of working together along the lines of different ethnic and religious affiliations. In cooperation with the Institute for Regional and International Studies at the American University of Sulaymaniyah, and the GPD Charitable Trust, the KAS Syria/Iraq Office held the third and final training of the Iraq Leadership Fellows Program (ILF).

Dialogue for Kurdish and Shia Decision-Makers in Iraq

The Kurdish referendum for independence of September 2017 increased tensions between the Kurdish and Shiite populations of Iraq. As peace in Iraq depends on the ability of the country’s different social groups to cooperate, the KAS Syria/Iraq Office and the Middle East Research Institute (MERI) organized a two-day exchange between political and religious leaders of the Kurdistan Region of Iraq (KRI) and the Shiite religious center of Najaf. On February 28 and March 01, 2018, a Kurdish delegation travelled to Najaf to establish a dialogue to prevent future conflict.

Event Series on the Reform of the Iraqi Electoral System

KAS and IHEC highlight the relevance of the elections in Iraq

Iraq has lived through politically and economically turbulent times since its last parliamentary election in 2014. After the rise and fall of the Islamic State (ISIL), the displacement and flight of millions of Iraqis, and the impact of the fall of the oil prices on the Iraqi economy, about 12 million citizens are now asked to vote in the upcoming elections on May 12. The Syria/Iraq Office and the Independent High Electoral Commission (IHEC) support this process in Sulaymaniyah, Erbil, Basrah and Baghdad. 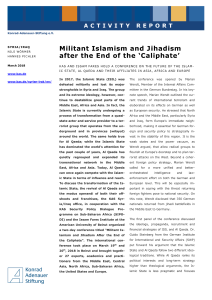 Militant Islamism and Jihadism after the End of the ‘Caliphate’

In 2017, the Islamic State was defeated militarily and lost its major strongholds in Syria and Iraq. The group and its extreme ideology, however, continue to destabilize great parts of the Middle East, Africa and Asia. In fact, the Islamic State is currently undergoing a process of transformation – from a quasi-state actor and service provider to a terrorist group that operates from the underground and in provinces around the world. The same is true for Al Qaeda: While the Islamic State dominated the world’s attention, Al Qaeda has quietly regrouped and expanded its transnational network.

Establishment of an Iraqi National Center Against Hate Speech

On March 15 and 16, the KAS Syria/Iraq office and Masarat for Cultural and Media Development (MCMD) held a two-day workshop in Beirut to establish and launch an Iraqi National Center Against Hate Speech. It brought together dedicated Iraqi journalists, religious clerics of different faiths and sects, civil society activists, bloggers, academics and social media activists, who signed a joint declaration to launch the Center for Countering Hate Speech in Iraq on March 16 in Beirut. 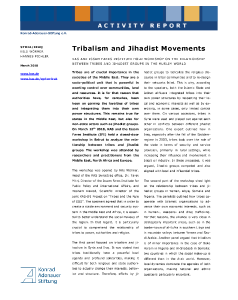 Tribes are of crucial importance in the societies of the Middle East. They are a socio-political unit that is powerful in exerting control over communities, land and resources. It is for that reason that authorities have, for centuries, been keen on gaining the loyalties of tribes and integrating them into their own power structures. This remains true for states in the Middle East, but also for non-state actors such as jihadist groups. On March 12th 2018, KAS and the Issam Fares Institute held a closed-door workshop in Beirut to analyze the relationship between tribes and jihadist groups.