Iraqi delegation discusses the future of German engagement in Iraq

In December 2017, Iraqi Prime Minister Haider Al-Abadi officially declared the military defeat of the Islamic State (ISIS) in Iraq. Nevertheless, the organization continues to threaten the stability of the country with terror attacks. The mandate of the German army training mission in Erbil will expire in late April 2018. From 27 February to 2 March, an Iraqi delegation visited Berlin on invitation of KAS and discussed the future of the German support for the country. Moreover, the talks focused on the looming conflict between Baghdad and Erbil and the upcoming general elections in Iraq.

In cooperation with the Institute for Regional and International Studies at the American University of Sulaymaniyah, the KAS Syria/Iraq Office held the second training of the Iraq Leadership Fellows Program for actors of media, politics and civil society from various regions of Iraq, including Kurdistan. Participants of the 2017-2018 cohort received their first advocacy training in Beirut in October 2017. The second training was conducted between March 5 and March 7 in Sulaymaniyah, and centered on advanced advocacy tools, strategy formulation, as well as on mobilization narratives. 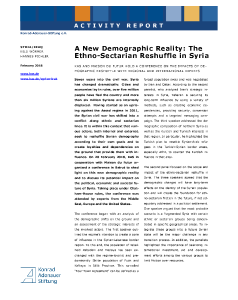 A New Demographic Reality: The Ethno-Sectarian Reshuffle in Syria

Conference on Impacts of Demographic Reshuffle in Syria

Seven years into the civil war, Syria has changed dramatically: Cities and economies lay in ruins, over five million people fled the country and more than six million Syrians are internally displaced. Moreover, various actors are seeking to reshuffle Syrian demography according to their own strategic goals and create dependencies on the ground that provide them with influence over the country. On 20 February 2018, KAS in cooperation with Maison du Futur organized a conference in Beirut in order to shed light on this new demographic reality and to discuss its potential impact on Syria. 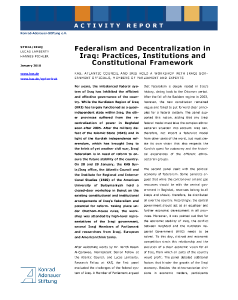 Federalism and Decentralisation in Iraq: Challenges and Reforms

For years, the imbalanced federal system of Iraq has inhibited the efficient and effective governance of the country. After the military defeat of the Islamic State and in light of the Kurdish independence referendum, Iraqi federalism is in need of reform to ensure the future stability of Iraq. On 28 and 29 January, the KAS Syria/Iraq office, the Atlantic Council and the Institute for Regional and International Studies (IRIS) in Sulaymaniyah held a workshop in Beirut on federalism with high-level representatives of the Iraqi government, Iraqi Members of Parliament and international experts.

Iraq at a Crossroads – Political Consolidation or Further Disintegration?

On December 9, 2017, the Iraqi Prime Minister Haider al-Abadi declared the military victory over the Islamic State (ISIS) in Iraq. However, the political fragmentation of the country as well as the conflict between the Iraqi central government and the Kurdistan Regional Government are still adding to the instability of the country. On January 29, the KAS Syria/Iraq office and the Middle East Institute for Research and Strategic Studies (MEIRSS) held a panel discussion in Beirut on the political situation in Iraq and the upcoming elections in May 2018.

In cooperation with the Middle East Institute for Research and Strategic Studies (MEIRSS) and the Independent High Electoral Commission (IHEC), the KAS Syria/Iraq Office organized several events on the Iraqi elections and the electoral system in Iraqi Kurdistan and Central Iraq.

KAS and MdF host workshop on influence, aims and strategies

The eighth round of Geneva talks on Syria has failed. The civil war in the country will continue. External actors have played a crucial role in the conflict. While Russia announced a partial withdrawal in December, Iran continues to be the largest backer of the Assad regime. On 29 November, the KAS Syria/Iraq office and Maison du Futur held a workshop on the influence of Turkey, Saudi Arabia and Qatar – hitherto the largest backers of the opposition – as well as Israel. A workshop on the Russian-Iranian intervention had already taken place in December 2016. 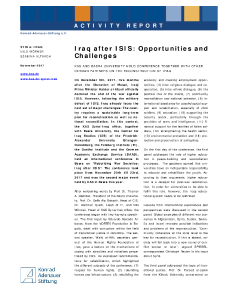 Iraq after the IS: Opportunities and Challenges

KAS and Basra University hold Conference on Reconstruction of Iraq

On December 9th, 2017, five months after the liberation of Mosul, Iraqi Prime Minister Haider al-Abadi officially declared the end of the war against the Islamic State (IS). However, following the military defeat of the organisation, Iraq already faces the next set of major challenges: The country requires a sustainable long-term plan for reconstruction as well as national reconciliation. In this context, the KAS Syria/Iraq office, together with Basra University and a number of German partners held an international conference in Basra on “Rebuilding War Societies: Iraq after the IS”.

German Stabilization Efforts in the Middle East - A Review

After the liberation of Raqqa and Mosul, the Islamic State (IS) is on the verge of a military defeat. However, the challenges in the Middle East, which still hosts around 15 million refugees, in the post-IS phase remain enormous. Against this background, the KAS Syria/Iraq office hosted a high-level workshop in Cadenabbia, Italy, to discuss challenges of opportunities of German stabilization efforts in the region.

In cooperation with the Institute for Regional and International Studies from the American University of Sulaymaniyah, the KAS Syria/Iraq Office launched a Leadership Fellows Program for Iraqi actors of media, politics and civil society. Participants of the cohorts receive three trainings a year on leadership skills, democratic participation and political responsibility. The program launched in Beirut on October 24-25 with the first intake of 22 young Iraqis coming from various regions, including Kurdistan-Iraq.