The war in Syria and the resulting refugee crisis have caused a palpable tension between the refugees and the host communities in most countries affected by the ongoing violence in Syria, including Lebanon. To foster a sense of comradery and common ground between the host community and the refugees in the face of rising unease, the Lebanese NGO Ad 4 Peace – with the support of KAS – provided workshops in September and October for young Lebanese and Syrians on political participation.

Basra is the second biggest city in Iraq, holds a majority of Iraqi crude oil reserves and is known as the gate to Iraq due to its maritime ports. At the same time, Basra and the south of Iraq are suffering from low economic growth rates and poverty. On October 8 and 9, the KAS Regional Programme for Energy Security and Climate Change in the Middle East and North Africa, the KAS Syria/Iraq office and the Arab Gulf Research Center of the University of Basra held a conference about the opportunities and obstacles for sustainable economic growth in the province. 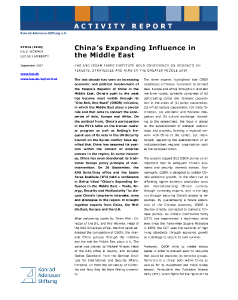 The last decade has seen an increasing economic and political involvement of the People’s Republic of China in the Middle East. China’s push to the west has become most visible through its “One Belt, One Road” initiative, in which the region plays a pivotal role and that aims to connect Asia, Europe and Africa. On 28 September, the KAS Syria/Iraq office and the Issam Fares Institute (IFI) held a conference in Beirut titled “China’s Expanding Influence in the Middle East – Trade, Energy, Security and Multipolarity” to discuss China’s long-term interests, aims and strategies in the region. 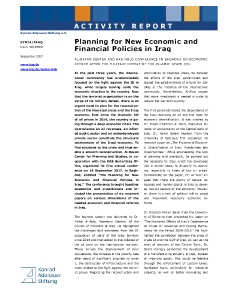 Planning for New Economic and Financial Policies in Iraq

In the past three years, the international community has predominately focused on the fight against the IS in Iraq. Now that the terrorist organization is on the verge of its military defeat, there is an urgent need to plan for the reconstruction of the liberated areas and the reform of the Iraqi economy. Against this background, the Al-Bayan Center for Planning and Studies, in cooperation with the KAS Syria/Iraq Office, held its first annual conference on 16 September 2017 in Baghdad under the title “The Planning for New Economic and Financial Policies in Iraq.” 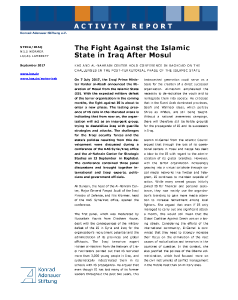 The Fight Against the Islamic State in Iraq After Mosul

On 7 July 2017, the Iraqi Prime Minister Haider al-Abadi announced the liberation of Mosul from the Islamic State (IS). But the lasting presence of IS cells in the liberated areas indicates already today that the organization will continue to destabilize the country in the future as an insurgency group. The challenges for the Iraqi security forces and the state’s policies resulting from this development were discussed during a conference of the KAS Syria/Iraq office and the al-Nahrain Center for Strategic Studies on 13 September in Bagh-dad. 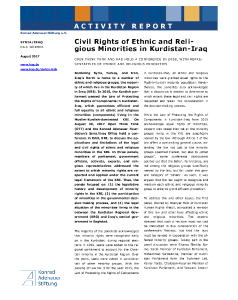 Civil rights of ethnic and religious minorities in Kurdistan-Iraq

The Kurdistan Region of Iraq (KRI) is home to a large number of different ethnic and religious minorities. In 2015, the Kurdish parliament passed the Law of Protecting the Rights of Components in Kurdistan-Iraq, which guarantees efficient and full equality to all ethnic and religious minorities living in the Muslim-Kurdish-dominated KRI. On 30 August 2017, Open Think Tank (OTT) and the Konrad Adenauer Foundation’s Syria/Iraq Office held a conference in Erbil to discuss the applications and limitations of the legal and civil rights of these minorities in the KRI.

Out of 180 countries, Syria has ranked 177 in the latest World Press Freedom Index of Reporters Without Borders. In order to enhance the establishment of a free media landscape in the country, the KAS Syria/Iraq office has supported the NGO Syria Direct in the first half of 2017 in founding the news platform Syrian Voice. The website, which by now has more than 20,000 followers on Facebook, features reporting of ten Syrian journalists from all parts of the country. Since mid-August, KAS and Syria Direct are implementing another project to further citizen journalism in southern Syria.

MERI, EWI and KAS hold workshop on reconstruction and reconciliation

Iraqi PM Haider Al-Abadi announced the liberation of Mosul from the Islamic State (IS) on 9 July 2017. With the expected territorial defeat of IS in all of Nineveh, the reconstruction and future political order of the province becomes a pressing issue. Prompt action is needed to ensure stabilisation, reconciliation and the return of IDPs. In May 2017, the Middle East Research Institute (MERI) and the EastWest Institute (EWI), supported by the KAS Syria/Iraq office, invited local stakeholders and international experts to a workshop on the future of Nineveh province to Loosdrecht, Netherlands. 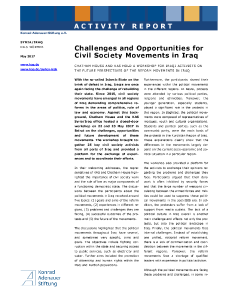 Challenges and Opportunities for Civil Society Movements in Iraq

Since 2015, civil society movements have emerged in all regions of Iraq demanding comprehensive reforms in the realm of politics, rule of law and economy. Against this background, Chatham House and the KAS Syria/Iraq office hosted a closed-door workshop on 22 and 23 May 2017 in Beirut on the challenges, opportunities and future development of these movements. The workshop brought together 25 key civil society activists from all parts of Iraq and provided a platform for exchange of experiences and to coordinate efforts.