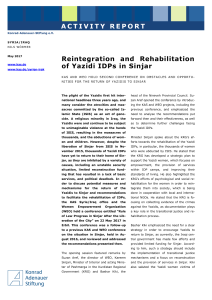 Return and reintegration of Yazidi refugees in Sinjar

KAS and WEO host second workshop on opportunities and obstacles

Despite the liberation of Sinjar from ISIS in November 2015, thousands of Yazidi IDPs have yet to return to their home of Sinjar. In order to discuss the obstacles and potential solutions for the return of the Yazidis, the KAS Syria/Iraq office and the Women Empowerment Organization (WEO) held a conference entitled “Rule of Law Progress in Sinjar After the Liberation of the City” on 22 May 2017 in Erbil. This conference was a follow-up to a previous KAS and WEO conference on the situation in Sinjar, held in August 2016, and reviewed and addressed the recommendations presented then. 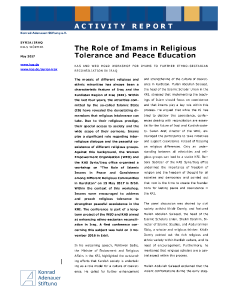 The role of Imams in ethno-sectarian reconciliation

The atrocities committed by the so-called Islamic State have revealed the devastating dimensions that religious intolerance can take. Imams play a significant role in furthering peaceful coexistence of different religious groups. Against this background, the Women Empowerment Organisation (WEO) and the KAS Syria/Iraq office held a workshop on “Religious Tolerance and Peace Education for Islamic Imams” on 15 May 2017 in Erbil. The conference is part of a long-term project of WEO and KAS aimed at ethno-sectarian reconciliation in Iraq. A first conference on the topic was held in November 2016.

Consequences of the Brexit for the Middle East

By triggering Article 50 of the Treaty of Lisbon at the end of March, British Prime Minister Theresa May has officially initiated the withdrawal of the United Kingdom from the European Union. Against this background, Konrad Adenauer Foundation and the al-Bayan Center for Planning and Studies hosted a panel discussion on 6 April 2017 in Baghdad that dealt with the possible consequences of the Brexit for Europe and for European foreign policy in the Middle East.

CSU-parliamentarian learns about the challenges in Iraq

From 5 to 10 April, the KAS Syria/Iraq office hosted CSU-parliamentarian Tobias Zech in Baghdad and in the Kurdistan Region of Iraq (KRI). Besides political talks in Baghdad and Erbil, the programme also included a visit of the city of Sinjar in Northern Iraq. Sinjar was captured by the so-called Islamic State (IS) in 2014 and was liberated in late 2015. Zech was one of the first German politicians to visit the completely destroyed Yezidi city since its liberation. 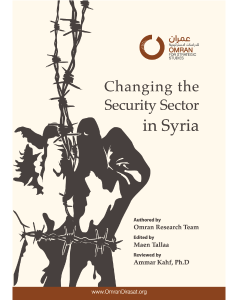 The Need for Security Sector Reform in Syria

Syria’s security services under the Assad regime are designed to protect the regime at all costs, and have also violated citizens’ rights and have created a culture of fear in Syria. In light of the continuing war and the perpetration of abuses by the security services, the KAS Syria/Iraq Office and its partner, the Omran Center for Strategic Studies, held a closed-door experts meeting in March 2017 in Beirut with various experts aiming at drafting a series of reports and recommendations on reforming Syria’s security sector. 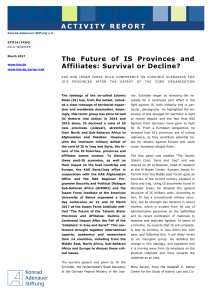 The Future of IS Provinces and Affiliates: Survival or Decline?

KAS and IFI hold conference on threat potential of IS provinces

The ideology of the so-called Islamic State (IS) has, from the outset, included a clear message of territorial expansion and worldwide domination. In 2014 and 2015, IS declared a total of 20 new provinces. However, with the imminent military defeat of the core of IS in Iraq and Syria, the future of the IS branches, provinces and affiliates seems unclear. To discuss these post-IS scenarios, the Syria/Iraq office and the Issam Fares Instituteorganised a two day conference on 21 and 22 March 2017. The conference brought together international experts, academics and researchers from 14 countries. 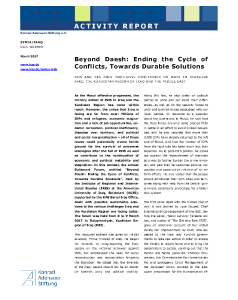 Beyond Daesh: Ending the Cycle of Conflicts, Towards Durable Solutions

From 8 to 9 March 2017, the KAS Syira/Iraq office and the Institute of Regional and International Studies (IRIS) at the American University of Iraq, Sulaimani (AUIS), held the annual Sulaimani Forum, entitled “Beyond Daesh: Ending the Cycle of Conflicts, Towards Durable Solutions.” The forum was attended by many high-ranking Iraqi and Kurdish officials, most notably the Iraqi Prime Minister Haider al-Abadi, who came directly from the Mosul offensive to the forum.

CDU-parliamentarian learns about the current situation in Northern Iraq

With the Mosul operation of the Iraqi army slowly but steadily advancing, questions regarding the future prospects of the Kurdistan Region of Iraq (KRI) and Iraq after the territorial defeat of the so-called Islamic State (IS) are increasingly reemerging. Against this background, the KAS Syria/Iraq Office with the support of the Kurdish Open Think Tank (OTT) hosted German Member of Parliament Roderich Kiesewetter from 2 to 4 March in the KRI.

The German-Iraqi relations have since 2014 entered into a new phase. Germany is one of the biggest donor countries of Iraq and is engaged militarily in the fight against the so-called Islamic State (ISIL). Moreover, by co-chairing the task force on stabilisation of the Global Coalition to Counter ISIL, Germany actively contributes to the reconstruction of Iraq. Against this background, the Syria/Iraq Office and the Domestic Programmes Team for the first time invited a delegation of Iraqi government representatives, members of parliament and think tankers to Germany. 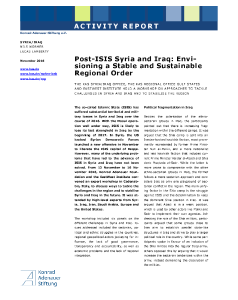 KAS and EastWest hold workshop on challgenges in the Middle East

The so-called Islamic State (ISIS) has suffered substantial territorial and military losses in Syria and Iraq in the course of 2016. However, many of the underlying problems that have led to the advance of ISIS in Syria and Iraq have not been solved. From 13 November to 16 November 2016, Konrad Adenauer Foundation and the EastWest Institute convened an expert workshop in Cadenabbia, Italy, to discuss ways to tackle the challenges in the region and to stabilise Syria and Iraq in the future. It was attended by experts from Syria, Iraq, Iran, Saudi Arabia, Europe and the United States.