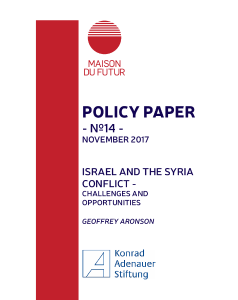 Israel's Role in the Syrian Conflict

Israel has significantly increased its engagement in Syria over the course of the last months. The Israeli airforce is conducting raids against positions of Hezbollah and the Assad regime in the southern parts of the country on a regular basis. Geoffrey Aronson from the Middle East Institute argues in a guest contribution for the KAS Syria/Iraq office and Maison du Futur that Israel is preparing for the "endgame" in Syria and aims to contain Iranian influence over Syria in the post-conflict scenario. 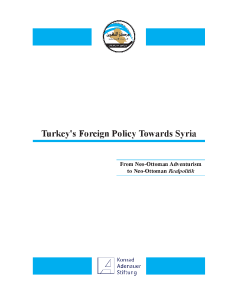 Turkey has been one of the main external actors in the Syrian civil war from the beginning. While Ankara supported a regime-change from 2011 onwards, the country seems to have largely abandoned this goal in the course of 2016 and is now predominantly focused on the conflict with the Syrian Kurds. In his guest contribution for the al-Nahrain Center for Strategic Studies and the KAS Syria/Iraq office, Tim Manhoff argues that Turkey's policy change signifies a shift from "Neo-Ottoman Adventurism" to "Neo-Ottoman Realpolitik". 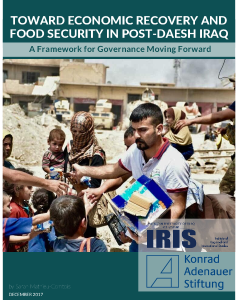 Toward Economic Recovery and Food Security in Post-ISIL Iraq

In Iraq, the recent war against the Islamic States (ISIL) resulted in massive food insecurity, and profoundly affected the food system’s infrastructure. Sarah Mathieu-Comtoi, in cooperation with the Institute of Regional and International Studies (IRIS) of the American University of Sulaymaniyah and the KAS Syria/Iraq Office, addresses current food insecurity in multiple post-ISIL towns in Iraq through the lens of economic recovery. She shows that these factors are mutually essential in Iraq, and that together they form the backbone of long-term post-conflict stability. 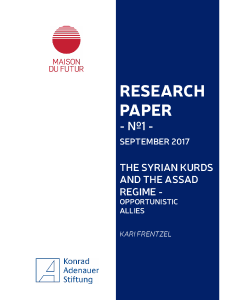 The Syrian Kurds and the Assad Regime - Opportunistic Allies

Despite the prominent position of the Syrian Kurds in the conflict and their military achievements, their political ambitions within the context of the Syrian crisis are not as widely covered by the media. The Kurds are a crucial, yet undetermined actor in the conflict, as their military capabilities make them an indispensable actor in the Raqqa offensive; however their relations with other actors are more muddled. In her research paper, Kari Frentzel analyzes the Syrian Kurds' relations with the Assad regime, as well as the US and Russia. 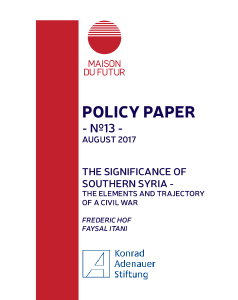 In spite of its geostrategic significance, the south of Syria has received less media and political attention than the rest of the war-torn country. In their policy paper for KAS and Maison du Futur, Frederic Hof and Faysal Itani from the Atlantic Council explain the relevance of the Syrian south for all actors involved. The two authors compare three possible scenarios for the future of the region and argue that an Iranian dominance at the borders to Jordan and Israel could be the most likely outcome of the current conflict. 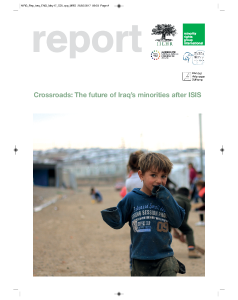 Report on the future of Iraqi minorities in the liberated territories

IILHR and KAS officially launch report in the European Parliament

With the recent liberation of territory by Iraqi security forces from the so-called Islamic State (IS), the question about the future of the ethno-religious minorities in Iraq is pressing. Against this background, the Institute for International Law and Human Rights (IILHR) with the support of KAS recently published its report “Crossroads: The future of Iraq’s minorities after ISIS” after several months of field research in Baghdad, Erbil and Dohuk. The report was officially launched at a conference in the European Parliament on 6 June that was hosted by MEPs Ana Gomes and Elmar Brok. 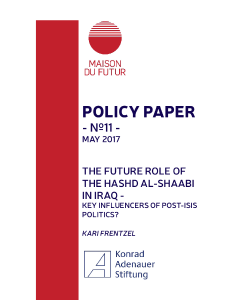 The Future Role of the Hashd al-Shaabi in Iraq

The Shia militias of Iraq, known as the Hashd al-Shaabi, have now been institutionalized as a permanent security force under the Iraqi state, and with upcoming elections, these militias are positioned to emerge as key political influencers. In her guest contribution published by KAS and Maison du Futur, Kari Frentzel examines the formation and composition of these militias and their ties to the Iraqi state, and argues that the Hashd will remain an autonomous actor that will exacerbate political tensions and increase Iranian influence in Iraqi politics in the post-ISIS period. 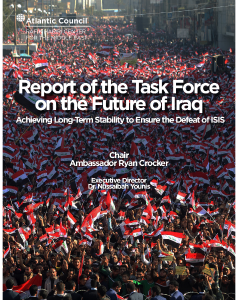 Report of the Task Force on the Future of Iraq

With the prospect of a military defeat of the so-called Islamic State (IS) in Mosul, there is a need for a strategy for the stabilisation of Iraq in the future. Over the last year, the Task Force on the Future of Iraq, an expert group founded by the Atlantic Council with the support of KAS to advise the US administration, has developed policy recommendations for the future US policy in Iraq. In its report, the task force advocates a long-term approach in Iraq with a focus on good governance and continued support for Iraqi security forces.

“The future of a whole region is at stake“

The so-called Islamic State (IS) in Iraq is under growing pressure after more than eight months of heavy fighting for the northern Iraqi city of Mosul. Therefore, the question on the future political situation of Iraq once again arises. In order to gain insight into the situation on the ground as well as the complex political, ethnic and religious conflicts within the country, the deputy Secretary General visited central Iraq and the Kurdistan Region of Iraq for five days. 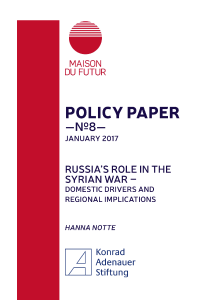 Over the past year, Russia has become an increasingly pivotal player in the Syrian war and, by extension, in the broader Middle East. Amidst the noise Russia’s impact in Syria has caused, the underlying drivers of its strategy – domestic, security and ideological – remain too often ignored. As a result, Russian decisions regarding Syria often seemed unpredictable and irrational to observers. However, Hanna Notte argues in her guest contribution, published by KAS and Maison du Futur, Russia’s strategy and fundamental interests in Syria have been remarkably consistent over the past six years.