“The future of a whole region is at stake“

The so-called Islamic State (IS) in Iraq is under growing pressure after more than eight months of heavy fighting for the northern Iraqi city of Mosul. Therefore, the question on the future political situation of Iraq once again arises. In order to gain insight into the situation on the ground as well as the complex political, ethnic and religious conflicts within the country, the deputy Secretary General visited central Iraq and the Kurdistan Region of Iraq for five days.
May 17, 2017 Ordering Information 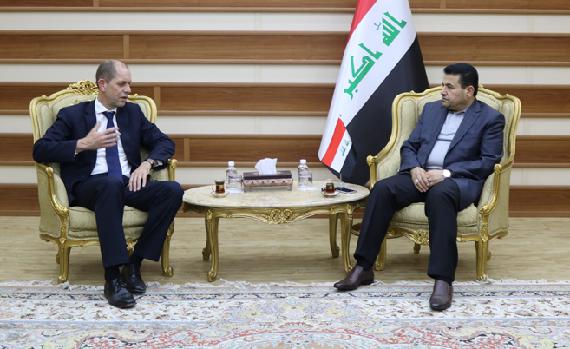 In Baghdad, Dr. Wahlers met with Qasim al-Araji, Minister of Interior of Iraq. Main topics discussed in the meeting were the fight against ISIS, the security cooperation between Germany and Iraq as well as the refugee situation. 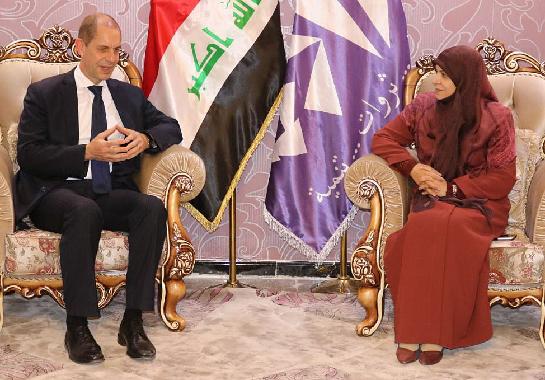 The program also included talks with members of the Iraqi parliament. With Dr. Hanan al-Fatlawi, one of the most popular woman parliamentarians of Iraq, Dr. Wahlers discussed the necessity of reconciliation for the reintegration of Iraqi refugees and IDPs as well as political and economic reforms. 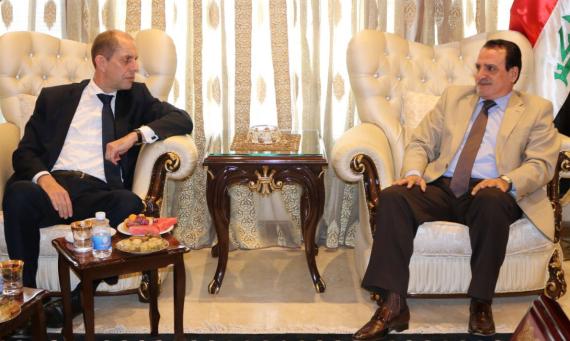 Moreover, Dr. Wahlers held talks with Adnan al-Asadi, Member of the Defence Committee of the Iraqi Parliament, about the interior political situation in Iraq and opportunities of future security cooperation between Germany and Iraq. 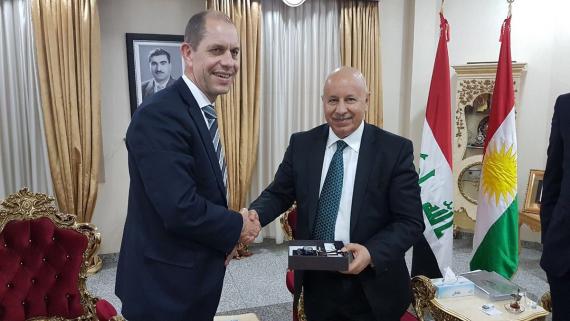 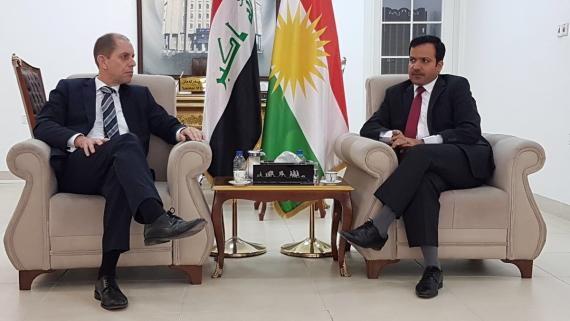 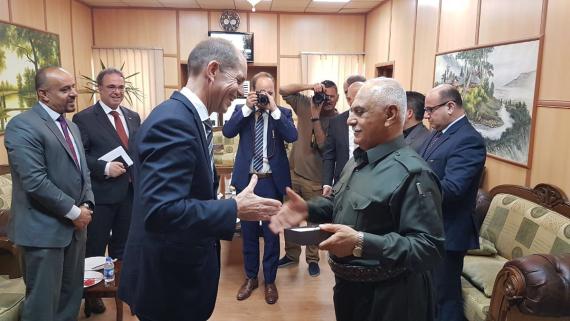 Dr. Wahlers also met with Sheikh Jaafar Mustafa in Sulaimaniyah, commander of the PUK peshmerga and member of the PUK politburo, who expressed his gratitude for the German military support for the Kurds in the fight against ISIS. 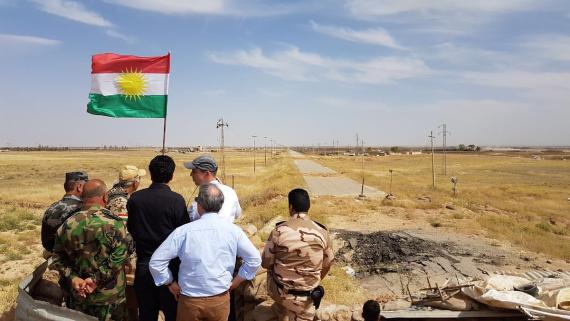 South of Sinjar, Dr. Wahlers visited positions of the peshmerga vis-a-vis the Popular Mobilization Units (al-Hashd al-Shaabi), who have recently regained vast territories from ISIS in the border region to Syria.

“What happens politically, socially and militarily in Iraq has immediate effects beyond its national borders”, said Dr Wahlers at the beginning of his stay in regards to the geostrategic importance of the country and to the significant role of Iraq from a security policy perspective. The refugee crisis of 2015 clearly demonstrated the relevance of the future of Iraq for both Germany and Europe. According to the Federal Office for Migration and Refugees, Iraqi refugees are the third largest group of refugees in Germany. The attacks of Würzburg, Ansbach and Berlin illustrate the characteristics of IS terrorists. The assignment of the German Federal Armed Forces to the training mission for the Kurdish Peshmerga highlights the importance of Iraq with regard to security policy.

The deputy Secretary General and head of the European and International Cooperation department explained during his meetings in Baghdad that the goal of the Konrad-Adenauer-Foundation is to support the stabilisation efforts of the Iraqi federal government politically as well as to analyse the challenges in Iraq and their effects on Germany and Europe.

Between reconciliation, fighting terrorism, the conflict between regional powers and gratitude for the support from Germany

Dr Wahlers held several meetings at the beginning of his trip to gain a deeper understanding of the current situation with the Iraqi Minister of Interior, Qasim al-Araji, the Deputy Security Advisor of Iraq, Dr Safaa Husein, Member of the Defence Committee in the Iraqi parliament, Adnan al-Asadi, as well as Dr Hanan Al-Fatlawi, a prominent female Member of Parliament. These meetings focused on the political and social challenges that Iraq will face after the military defeat of the so-called Islamic State in Mosul and its surrounding regions. In order to reach a sustainable state of peace, the meetings highlighted that it will be necessary to reconcile the various religious and ethnic groups within Iraq, such as Sunnis, Shiites and Kurds, as well as placing an emphasis on the recovery of the local economy. Many militias were involved in the fight against IS, hence, the question on the command of these militias in the future is also heavily debated in Baghdad. The conversation with representatives of KAS’s partner Al-Bayan Center for Planning and Studies pointed out that this question is closely linked to the future role of the regional powers of Iran, Saudi Arabia and Turkey in Iraq.

In addition to Baghdad, Dr Wahlers also visited Sulaymaniyah, Duhok and the capital of the Kurdistan Region of Iraq, Erbil, during his trip. This part of the program included meetings with the commander-in-chief of the Kurdish Peshmerga, politicians from different Kurdish parties and representatives of the Kurdistan Regional Government, as well as a visit to the training mission of the German Federal Armed Forces. In these meetings, critical topics such as the internal Kurdish debate on the future of the regional government and disagreements between the central government in Baghdad and the regional government in Erbil regarding the revenue of oil production in Kurdistan were addressed. Dr Wahlers’ delegation was advised in several meetings about the growing influence of Shiite militias and of Iran after the military defeat of the so-called Islamic State.

To get an understanding of the situation on the ground, the deputy Secretary General also visited the Yazidi city of Sinjar in northern Iraq, which was invaded by the so-called Islamic State in the autumn of 2015 and subsequently razed to the ground. Due to the complete destruction of the city, reconstruction of destroyed areas in the region is critical and security measures and economic development need to be implemented simultaneously, explained the head of the European and International Cooperation department.

“All meetings in Baghdad as well as in Kurdistan highlighted the distinct gratitude of Iraqis towards the military and political support of the German federal government for the stabilisation of Iraq”, Dr Wahlers summarized his impressions at the end of his trip. “We as the Konrad-Adenauer-Foundation would like to continuously make a contribution towards this with our available means”.

The Syria/Iraq office of the Konrad-Adenauer-Foundation was set up in September 2015 and is one of the 14 projects of the Konrad-Adenauer-Foundation in the Near and Middle East. The team, under the leadership of Nils Wörmer, deals with the political and social situations in both countries, questions regarding the stability of neighbouring countries, the refugee situation and security implications arising from the Syrian civil war and the expansion of the Islamic State (IS). The office is headquartered in Beirut, Lebanon.

The Konrad-Adenauer-Foundation achieves its goals through a variety of different tools, foremost through trainings, education and consultation, as well as through dialogue programmes, research and publications. These projects are supported by visitors and dialogue programmes in Germany and Europe as well as by providing reports on political incidents and topics to the German parliament and the federal government.