A Decade to the Catastrophe

Interview with Jihad Yazigi on the Arab Spring 2011

When Jihad Yazigi, Co-Founder of The Syrian Observer, looks back on the events of the Arab Spring in Syria, only one word comes to his mind: “catastrophe“. “The country has been largely destroyed. We have had an enormous number of people killed, raped, tortured and displaced“, says the journalist who founded his online newspaper shortly after the Syria's uprising commenced.
December 16, 2020 Ordering Information

It's been ten years since anti-government protests rocked Tunisia and heralded what became known as the “Arab Spring“. According to Yazigi, obviously he didn’t expect the uprising as it eventually happened to take place, but it was clear to him that these changes could not, not have an impact on Syria.
Even if the protests in the country began with hopes of reforms after the upheavals in Tunisia and Egypt, the dream of turning an authoritarian regime into a democracy quickly died. Instead, Syria sank into war and chaos with traumatic effects for the population.
For the Konrad-Adenauer-Foundation’s Syria/Iraq office, Yazigi looks back on the beginnings of this historical movement and what’s left after one conflictual decade. He tells how he personally experienced the Arab Spring in Damascus ten years ago, when you could feel in the city's cafes that change was in the air, and how the events influenced his personal relationships with friends and family.
But we are also looking ahead with him. Because with Joe Biden a Democrat will take over the presidency in the USA again in January. What consequences could this have for Syria?
Even if Yazigi is pessimistic about the future of his home country, he has not completely given up hope: “We need also to move ahead because one day things will change.“ 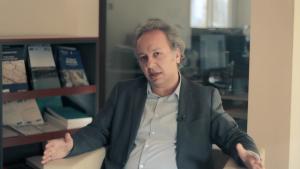 KAS
More about this topic