The Struggle for a Life in Dignity

A Decade after the Arab Spring: What’s left of the historic movement?

The self-immolation of the Tunisian greengrocer Mohamed Bouazizi on December 17, ten years ago, triggered a wave of protests across the Arab world. Suddenly change seemed within reach to transform authoritarian regimens in the Middle East and North Africa into democracies. But only Tunisia experienced a democratic transition. For countries like Syria, a decade of "Arab Spring" also means a decade of war. So what is left of the demands for freedom of expression, democracy and equality today?
December 16, 2020 Ordering Information

Today, the hope for change many people had in 2011 has mostly given way to disillusionment. The Konrad-Adenauer-Foundation’s Syria/Iraq Office has asked six prominent civil society figures from both countries to review and evaluate the development. In their interviews they describe their own personal experiences, assessments and hopes. Dlawer Ala’ Aldeen, President of The Middle East Research Institute (MERI) in Erbil, describes for example how he experienced the beginnings of the Arab Spring in his role as Minister of Higher Education and Scientific Research at that time. Dhikra Sarsam, Deputy Director of Burj Babel for Media Development, looks at the recent wave of protests in Iraq and the young generation that has been leading the street protests since October 2019; and Fatima Al-Bahadly, Managing Director Al-Firdaws Society Iraq, hopes that her country will benefit from the experiences that other countries have made during Arab Spring.
In Syria the protests turned into an armed uprising, which culminated in a war that continues to this day. The Syrian writer and political analyst, Rime Allaf, describes her feelings during the first weeks of the Arab Spring when thousands of people demanded the downfall of the regime. The author and researcher, Jana Nasser, analyzes how the demands of the population have changed in the course of the uprisings. And Manar Rachwani from Syria Direct, an independent journalism organization, talks about how the events of the Arab Spring were a turning point in his relationship with several friends. 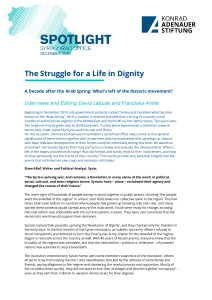