In mid-2021 the EU experienced an influx of several tens of thousands of immigrants, primarily from Iraqi Kurdistan. Belarusian authorities fueled the situation by increasing the number of flights from the Middle East and issuing Belarusian visas. Some European countries have described the crisis as “hybrid warfare” waged by Belarus against the EU. But what made Iraqi Kurds seek a better life abroad? Mera Jasm Bakr analyzes the drivers for the emigration from Iraqi Kurdistan.
May 26, 2022 Ordering Information

Since the US-led invasion of Iraq in 2003, the Kurdistan Region of Iraq (KRI) appeared to be a thriving region in the north of the country, even called the "other Iraq" by many. The region experienced considerable economic and infrastructural development after the collapse of the Baath regime, in contrast to the central and southern provinces plagued by economic and security crises. However, when throngs of migrants appeared at the border between Belarus and Poland in November 2021, it came as a surprise to many that the majority of the migrants stranded at the border were Iraqi Kurds. What drove the Iraqi Kurds to migrate en masse? The duopoly rule of the Kurdistan Democratic Party (KDP) and the Patriotic Union of Kurdistan (PUK), since the formation of the Kurdistan Regional Government (KRG) in 1992, has created a political status quo that has caused widespread disillusionment and has left citizens with little to no hope for economic and political reforms. Importantly, the two parties' patronage-based economy is no longer able to absorb the majority of its supporters into the labor force. Amidst the absence of any meaningful political and economic reforms, as well as a growing population on the margins of the KDP-PUK client network, Iraqi Kurdish migration to Europe will continue to surge. 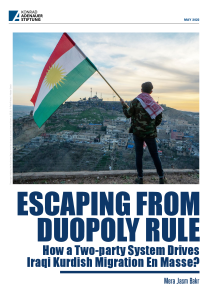