Interview with Abbas al-Anbori, Chairman of Rewaq Baghdad Center for Public Policy, on the parliament's vote on the Iraqi presidency

„From Beirut to Baghdad ─ Konrad’s Journey through the Middle East“ is a podcast by the Konrad-Adenauer-Foundation’s Syria/Iraq-Office. Based in Beirut, the podcast discusses current political issues in the region with the foundation’s on the ground partners in Syria, Iraq and across the Middle East. Each episode sheds light on up-to-date political, social and economic topics, and provides insights into life and work from Beirut to Baghdad.
March 30, 2022 Ordering Information

In the seventh episode Abbas al-Anbori talks about the vote on the presidency in Iraq's parliament . Almost six month ago, on 10 October, 2021, Iraqis had cast their vote and elected a new parliament. A new government, however, has not been formed yet. The struggle between two major competing coalitions „Save the Homeland“ led by Muqtada al-Sadr and the Shiite „Coordination Framework“ headed by former Iraqi Prime Minister Nuri  al-Maliki over who will form the next government continues and reached its climax in recent days. After a tumultuous session in early January the Speaker of Parliament, Mohammed al-Halbousi, was elected and the date for the vote on the presidency was set for 8 February, 2022. However, the key political coalitions - al-Sadr's bloc and the „Coordination Framework“ - both boycotted the vote. Consequently, the necessary quorum of 220 Members of Parliament - out of in total 329 - was not achieved and the election was postponed to 26 March. This time, al-Sadr and his politicalallies attended the session, but their major rivals, the „Coordination Framework“ and others abstained. As a result, the quorum was not reached for the second time and the vote was adjourned to 30 March, 2022.

Abbas al-Anbori and David Labude discuss the way forward ahead of the vote, as it seemed that the parliamentary meeting will not have quorum for the third time, because key political blocs apparently want to postpone it again in order to have more time for negotiations. 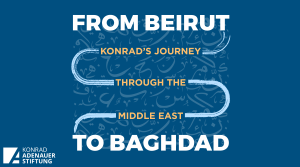