Furthering the Integration of Syrian Refugees in Turkey

Some of the main obstacles to refugee integration into a host community are often caused by a lack of information on the workings of the host society and its government. A project funded by the KAS Syria/Iraq office and implemented by the Hasan Kalyoncu University in Gaziantep from June to October 2016 aimed to counter this problem and to contribute to the integration of the Syrian refugee community in Turkey into the country’s social, economic, cultural and legal systems.
November 24, 2016 Ordering Information

The overall aim of the project was to train Syrian leaders from the refugee community to become trainers themselves, in order to pass on their knowledge in workshops to other Syrian refugees in their respective communities. From the Syrian refugee community of Gaziantep, ten community leaders were selected, including teachers, college students, engineers, lawyers, doctors, CSO officials, and Imams. They were then trained by 20 experts on a variety of subjects relevant to the integration of Syrians in Turkey. Trainers included professors and employees of Hasan Kalyoncu University, lawyers, social and NGO workers as well as government employees. Among the areas covered were services made available to the refugees both by the Turkish government and NGOs, including psychological support and services inside the camps; their rights and legal status in Turkey, including opportunities to receive work permits; possibilities of accessing universities, renting apartments, and social and cultural life in Gaziantep. After the trainings were completed, a handbook with information on these issues was produced and then distributed during the workshops held by the Syrian community leaders in different areas of Gaziantep. 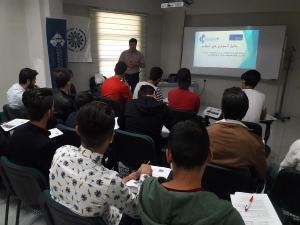 One of the trained Syrian leader holds a workshop 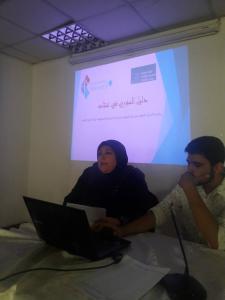 A Syrian participants holds a workshop for other refugees 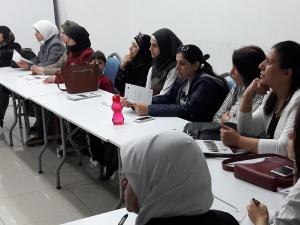 Participants during a workshop