Can new actors bring political change into a stagnant system?

About three months after the Iraqi parliamentary election of October 10, 2021, no new government has been formed yet. Previous elections show that it takes time until the three presidencies – the speaker of parliament, the president and the prime minister – are decided upon, as only then, a new cabinet can be formed. While Iraq’s political factions are negotiating possible constellations Hamzeh Hadad, Marsin Alshamary and Hashim al-Rikabi address the impact the new electoral system had on the vote, the role of independent candidates and new political parties, and what it takes to form the next government. In part two of the publication series Marsin Alshamary analyzes the role and impact of independent candidates and new political parties.
January 14, 2022 Ordering Information

In the days and weeks leading up to the Iraqi parliamentary election on October 10, 2021 activists and citizens despaired of change, and many insisted on an electoral boycott. The turnout was the lowest in Iraq’s post-2003 history, coming at almost 44% only by the most generous estimation. Despite this lack of participation, citizens, observers and even the political elite were surprised by the results of the elections. Emtidad, a newly established political party with roots in the protest movement that brought about early elections, had won a surprising nine seats in the Iraqi parliament. Other new parties emerged victors as well, with Ishraqat Kanoon winning six seats. Moreover, 43 independent candidates had won seats. At the same time, some of the entrenched elite – namely the Fateh coalition and the Alliance of National State Forces (of former Prime Minister Haider Al-Abadi and Ammar Al-Hakim) – suffered surprising losses. For a few days, Iraqis celebrated the unexpected results and began to wonder, what would have happened had more Iraqis voted? Others cautioned that the celebrations came too early, insisting that the independents could easily be indirectly linked to the established political parties that have led Iraq since 2005.

This analysis presents the outcome of the elections and describes the environment in which they occurred. Further, it introduces the new political parties, Emtidad and Ishraqat Kanoon, and independent candidates, and provides an overview of the career trajectories, as well as an analysis of their capacity to engage in politics. Moreover, the analysis showcases different scenarios for the bargaining power of various political sides. Finally, it provides recommendations for organizations seeking to bolster Iraqi voter turnout, as well as for new political parties and independent candidates who want to carve a space for themselves in Iraq’s political sphere. 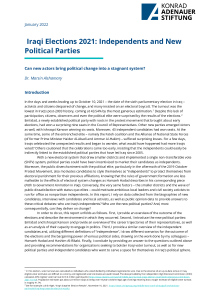