Improving ties between the Lebanese society and Syrian refugees

More than one million Syrian refugees currently live in Lebanon. With a population of just four million Lebanese, the influx of Syrians challenges the delicate balance of the Lebanese society. To strengthen communication between Lebanese and Syrians during the most trying period of their shared history, Hayya Bina supported by the Konrad-Adenauer-Foundation undertook the project “Keeping Pace with Lebanon’s Challenging ‘Syrian’ Question” from September to December 2015.
February 25, 2016 Ordering Information

The project included two strands. On the one hand, grass root meetings were held between representatives of the host and refugee communities. On the other hand, Hayya Bina has established a database with media analysis of the situation of Syrian refugees in Lebanon. This included a monitoring of developments related to the refugee crisis between September and November 2015, which was recently published in three reports. Since the influx of Syrian refugees is the most difficult social problem Lebanon has faced since the civil war, documenting the country’s response to this human catastrophe is crucial to understanding and mitigating its consequences. 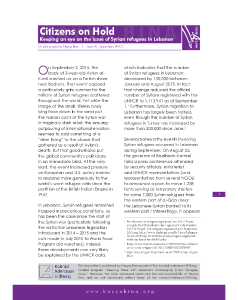