The article series “The Iranian Crescent” analyzes Iran’s political, geostrategic and economic interests in Syria, Iraq and Lebanon. Part one of the trilogy sheds light on Iraqi-Iranian relations since the fall of the Saddam regime
February 12, 2021 Ordering Information

Iraq and Iran are considered two of the main players in the in the Middle East and their relation towards one another is of great significance for the region as a whole. How did their economic and political ties develop in the post-Saddam era? And how do the US’ and Saudi Arabia’s interests affect Iraq’s foreign relations?

The American invasion of Iraq and the subsequent fall of Saddam Hussein’s regime in 2003 were major factors behind the emergence of new geopolitical developments, not only in the sphere of Iraq’s foreign policy but also in its relations with other countries in the region, amongst them Iran. Immediately the Iranian government welcomed the new developments that were taking place in Iraq after the old regime had fallen; Tehran expressed its willingness to establish bilateral ties on a variety of levels.

The analysis, Iraqi-Iranian Relations Since 2003“ addresses religious and cultural aspects, especially the reciprocal influence of Iraqi and Iranian Shi’ism in Najaf and Qom, respectively. In an attempt to exert its influence on Iraqi civil society, Iran seeks to win Iraqi hearts and minds by employing soft power through charitable institutions in Iraq. Since Iran’s exports are limited by a strict sanctions regime, Iraq is one of the rare export markets. Thus, Iran’s extensive electricity and gas supplies to Iraq are an important source of income for Tehran. Further, they increase both countries’ dependency on one another.

At the same time, Iran, the US and Saudi Arabia are fighting a proxy war on Iraqi soil, causing major political obstacles and security dilemmas for Iraq. However, while the US-Saudi-Iranian rivalry continues unabated, the new US government under Joe Biden is likely to further reduce US troops in Iraq.

In light of the above, Iraqi-Iranian political relations are observed and the climate necessary for a sustainable strategic alliance between the two countries is being discussed. 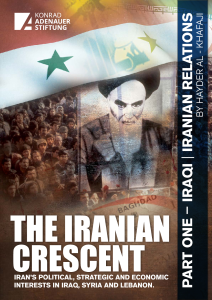