Lebanese-Iranian Relations Since the 1990s

The article series "The Iranian Crescent" analyzes Iran's political, geostrategic and economic interests in Syria, Iraq and Lebanon. Part two of the trilogy sheds light on Lebanese-Iranian relations since the end of Lebanon's civil war in 1990
May 23, 2022 Ordering Information

To many, Lebanon is nothing more than a pawn manipulated by Iran and its Lebanese proxy Hezbollah, to be used as a base for the latter to operate out of and pursue the Iranian Revolutionary Guard Corps expansionist regional plans. Yet the Lebanese Iranian relationship and its multi-layered nature is more complex and complicated than the Iranian military hegemony of this small Mediterranean nation. As it recently celebrated its centennial, the Lebanese Republic founded in September of 1920 by the French Mandate, faces an existential threat manifested in the total collapse of its economic and political system, a collapse which was mainly due to Iran's overambitious regional project which Lebanon is a pillar off.

The Lebanese-Iranian relationship fails to qualify as bilateral, especially after 1990, the end of the Lebanese civil war. Syria's custodianship over Lebanon until 2005 prevented the development of Lebanese-Iranian ties. Following Syria's withdrawal, Hezbollah became in charge of the relations.

Today, Lebanon has entered a deadly political vortex that has accelerated its economic downfall and, like many of the countries in the region with noticeable Iranian hegemony, is struggling to protect the last semblance of order as it faces a fate similar to Venezuela and North Korea.

Makram Rabah's analysis is an attempt to trace the evolution of the Lebanese-Iranian relationship while delving deeper into the watershed moments between the two nations, and to go beyond the influence and challenges that revolutionary Iran has presented on the small country. 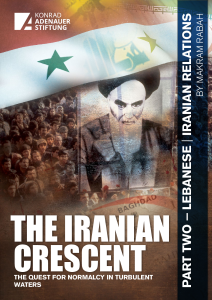