The article series "The Iranian Crescent" analyzes Iran's political, geostrategic and economic interests in Syria, Iraq and Lebanon. Part three of the trilogy sheds light on Syrian-Iranian relations since the 2000s with a focus on the bilateral relations since the beginning of the uprising against President Assad's rule in 2011.
June 13, 2022 Ordering Information

The alliance between Syria and Iran goes back to the 1990s, but with Bashar al-Assad assuming the presidency in 2000 it intensified. Following events, such as the Iraq War in 2003 and the 2006 Lebanon War, brought the two countries closer together. Syria became increasingly dependent on Iran for political and military support, as Assad mostly failed to maintain positive relations with other Arab states.

In June 2006, Iran and Syria signed a pact for military cooperation against “common threats” from Israel and the United States. For Iran, Syria is part of its own security buffer and a means to exercise influence over the region. When the Syrian uprising against Assad’s rule began in 2011, Iran feared losing its ally. Consequently, Tehran did not support the Syrian protest movement, although it was in favor of the “Arab Spring movements” against pro-Western regimes elsewhere, for instance, in Egypt, Tunisia, Libya, and Bahrain. The ensuing violence helped Iran to increase its military sway over Syria. Iran sent reinforcements, recruited local militias and integrated these proxies into Syria’s military and security apparatus, which provides them legality and a shield from possible Israeli or US airstrikes.

With the decline of military operations in 2017, Iran started to infiltrate the Syrian economy. It provides crucial economic aid to the Syrian regime and in return is granted investment opportunities in key sectors, such as telecommunications, energy, construction and agriculture. By providing loans for the import of fuel and other commodities Iranian companies control significant parts of Syria’s economy. Iran is also keeping an eye on Syria's reconstruction, as this is a potentially lucrative investment opportunity.

To ensure a long-term presence in Syria, Iran tries to win over local communities by providing social welfare and basic need services. The absence of the Syrian state plays into Tehran’s hands. Shiite religious centers and charitable organizations are means to establish loyal client networks.

In this study, Nawar Shaban provides an overview of Iran's involvement in Syria, he highlights the extent of Iranian influence on Syria’s society, economy and the security realm. In addition, he outlines the different tactics used by Iran, its strategic goals and the means to achieve them. 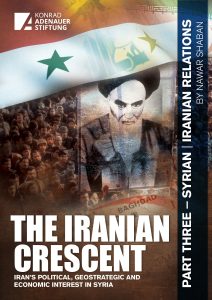