The Landscape of Civil Society in Iraq

The Relationship of CSOs with Government, Religious, and Tribal Institutions at the Sub-State Level

The civil society possesses significant impact on countries. It campaigns on issues as human rights or environmental protection, and might eventually influence political decision making. Iraq’s civil society came to the fore when anti-government protests swept across the country in October 2019. But how is Iraq’s civil society organized? Marsin Alshamary and Sura Maqsoud set out to provide a bird’s eye view of the situation on the ground.
July 1, 2022 Ordering Information

Many scholars, policymakers, and observers view civil society as a force to be reckoned with in the political arena. Although they differ on what its exact function is and whether it challenges the political status quo or entrenches it, they nevertheless keep an eye on it, aware of its potential. This is the case globally with hundreds of reports and articles written to examine the tenuous link between civil society and political and economic outcomes in places ranging from China to the United States, Brazil, Spain, Palestine and Lebanon. Iraq is no exception, particularly as anti-government protests swept across the nation in late 2019, highlighting the salience of activism and civil society organizations.

The challenge with Iraq has been to build a democracy while keeping the political class in check, a task that, in theory, falls to civil society. This, of course, is difficult in Iraq’s case where civil society was nearly non-existent under the Ba’ath dictatorship. Like the democratization project in Iraq, civil society has sprung with little foundation, sometimes inorganically, and has had to adapt to unprecedented circumstances.

In this rapidly changing context, many international organizations, donors, and local philanthropists have attempted to deliver support to Iraqi civil society, but with little tools available to understand its landscape, its function, and its needs. Similarly, many researchers have been interested in its role in society but have also approached it through the limited lens of the most visible organizations. Therefore, most analyses of civil society zeroes in on a handful of organizations and examines their relationship with the state and with society. This approach is valuable as these organizations comprise the most active and politically savvy organizations in the country. However, what is missing in both the study of civil society and in its support is a bird’s eye view of Iraqi civil society.

To remedy this and to serve as a base for future research, this report delivers a macro-level analysis of civil society in Iraq, analyzing over 4000 organizations across 15 of Iraq’s 18 governorates (Kurdistan Region of Iraq excluded), with interviews and surveys. 100 organizations were interviewed, in addition to Iraq‘s NGO Directorate, the governmental office tasked with registering organizations. 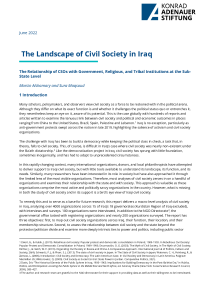