Tishreen Women and the 2021 Iraqi Elections

Iraq's Tishreen women played diverse roles in the recent elections that took place in October 2021. Aside from being candidates, previous female protesters were constituents, boycotters, local observers and trainers. Despite their increased participation women's political activism in Iraq is dangerous. Iraqi women activists work under an authoritarian climate, defying gender-bias restrictions, and gender-based violence. Thus, it is on Iraq's decision makers and society to continue enhancing women's empowerment in the political and electoral processes.
March 22, 2022 Ordering Information

Women's contribution in the latest electoral round was highly influenced by their diverse participation in Tishreen that varied from providing logistical support, to forming human shields to protect male protesters. Due to these multiple roles, women's presence in the protest areas was extremely dangerous. A number of women protesters were forcibly disappeared, others were threatened, and some were fatally shot. The gender-based violence embodied the fragility of the security situation, placing women under a consistent pressure of intimidation and threat. The unleashing of armed auxiliaries and forces raised many questions about the notion of democracy in Iraq, enforcing public distrust not only in the political system, but also in the electoral process that legitimizes the regeneration of the political class. In this hostile context, it was central for Tishreen women to determine the form of their participation in the electoral processes.

The 2021 elections revealed complex views of women protesters about the electoral system and the Iraqi Gender Quota System (GQS), reflecting the complications around the elections as a democratic process that runs under a hybrid state like Iraq.

The debate on electoral participation was heated in 2021 with the emergence of a new class of Tishreen men and women politicians who ran for office. This pragmatic class of protesters decided to permeate the political system to achieve the reform they called for in the protest movement. Standing for elections created a new paradigm in women's activism that sits on the intersectionality of social mobilization and political representation. Women succeeded in changing the electoral game of the 2021 round. Based solely on their votes, women secured 12 seats over the 83 designated for the GQS. Including 8 Tishreen women, women were granted 95 seats, making female representatives this year almost 30 percent of the parliament total.

This article is available in English and Arabic.

Dr. Hadeel Abdelhameed is a non-resident fellow at Richardson Institute/ Lancaster University, and Konrad-Adenauer-Stiftung e.V. Research Fellow in Iraqi gender, electoral and political issues. She received her PhD from La Trobe University in Iraqi Theatre about War and Gender in 2019. Her research interests centre around the Iraqi issues of women political representation and gender performance, women activism and social movements, gender roles in electoral and political processes, and cultural productions related to gender politics and war in Iraq. Dr Abdelhameed is published in Cambridge Core, Journal of Contemporary Iraq and the Arab World, and  AIIA. 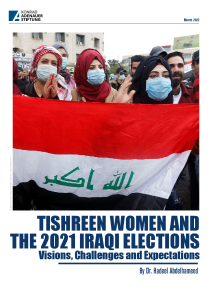