“Who killed me?” Iraqi activism for justice

Since October 2019, the Iraqi anti-government protest movement demands justice for the killed and injured among them.

19 months after the start of protests in Iraq, the majority of crimes committed against activists have still not been cleared up. While the government has promised redress, an ongoing climate of fear has left the protest movement depleted and with little hope for justice, compensation or political reform.
June 10, 2021 Ordering Information

Anti-government demonstrations are nothing new in Iraq. The latest round of large-scale protests occurred in October 2019. Iraqis demand the improvement of basic services, an end to interference from foreign powers, and above all, an overhaul of the ethno-sectarian power-sharing system and its endemic corruption.

However, they are faced with violent suppression by security forces as well as other unidentified “third parties”, often believed to be affiliated with Iranian-backed militia groups. In total, 580 individuals were killed and 24 000 injured. The Konrad-Adenauer-Foundation interviewed protesters that sustained permanent injuries from live bullets or tear gas canisters as well as the spokesperson of the Iraqi High Commission for Human Rights. Until this day, the vast majority of victims are still waiting for redress and compensation from their government. Both the former as well as the current government has promised on several occasions to investigate the unlawful crimes, bring the perpetrators to justice and provide compensation and medical care for the victims. Yet, procedures have remained elusive and at the time of writing – 19 months after the start of protests – almost none of the cases has been cleared up.

Activists have grown increasingly hopeless, especially as targeted assassinations against prominent figures of the protest movement have created a climate of fear. Ahead of Iraq’s election scheduled for October 2021, protesters claim that in an environment, where the killers of their peers operate with impunity, their ability to vote freely and participate in the political process is extremely limited. 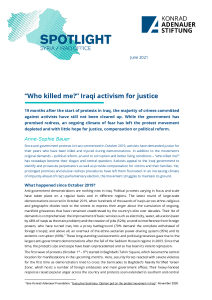