KAS and Al-Haq conduct a workshop to enable the youth of Kirkuk and Salah al-Din to get more involved in the process of conflict resolution and peace building
June 27, 2019 Ordering Information 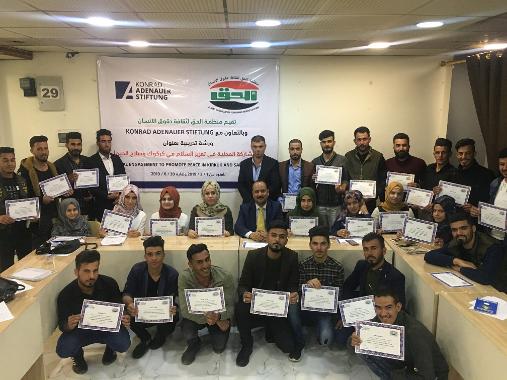 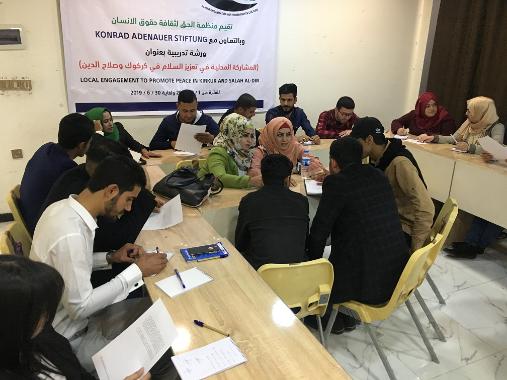 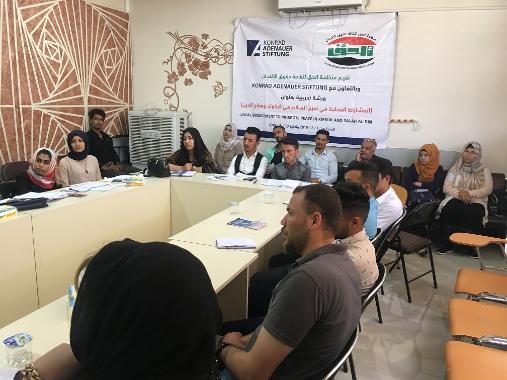 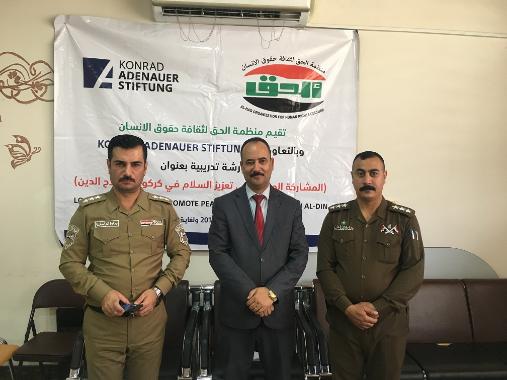 Today, both Kirkuk and Salah al-Din are considered to be ethnically heterogeneous cities. The two governorates are home to a diverse mix of ethnicities and sects including Arabs, Kurds, Turkmans, Christians and Muslims. Hence, it is very important to help these diverse groups stay connected to one another in order to promote a peaceful culture in their communities. This is why five training workshops were conducted for 135 young Iraqi activists and each training lasted for three days; three workshops were targeting the youth of Kirkuk, including 25 participants each, and the other two workshops were targeting the youth of Salah al-Din, including 30 participants each to help participants become knowledgeable about how to use proper peace building and conflict resolution mechanisms. The trainings took place in 2019 as follows: The first from 23 until 25 February, the second from 15 until 17 March, The third from 20 until 22 April, the fourth from 1 to 3 May, and the fifth and final training from 25 until 27 June.

KAS Syria/Iraq and the NGO Al-Haq organized the five workshops to give the trained youths the opportunity to promote a peaceful culture among their community and to apply the learned mechanisms in the context of their society. As mentioned before, each workshop consisted of three days that included interesting content; The first day of all five workshops allowed the youths to learn the definition and types of conflict, the importance of mediation, and the role it plays in resolving disputes. The second day focused on the topics learned on the first day that were practiced in roleplaying where groups had to apply the right technique for an effective dispute resolution so they would have a clear overview of mediation and conflict, the mediation process itself, and the best approaches in solving a conflict in a realistic setting. It was a good practice as it prepared them to resolve disputes with other mediators on the individual level before applying the practices within the Kirkuk society. The third and final day allowed each of the five workshops to be completed by teaching the participants how to respond to conflicts. They learned that there should be a right usage of strategies and techniques to manage their interpersonal communication behaviors in conflict situations. The participants on this day were mediating among each other where they were engaged in a mediation role-play, this exercise taught the participants to conduct a dialogue and to understand people with opposite point of views; participants were improving gradually each day. The training influenced them to change their attitudes which would lead to personal and societal development as a whole.

It was obvious that the participants expanded their knowledge on how to use peace building and conflict resolution mechanisms as they were ready to apply the learned techniques in their societies.