Iraq formed a new government in October 2018 which, in addition to the country's ongoing stabilization efforts following the fight against the so-called Islamic State (ISIS), is pursuing an ambitious reform agenda. Germany is one of the main donors and an active supporter of the country‘s reconstruction. In this context, the KAS Syria/Iraq Office together with the KAS Headquarters invited a delegation of Iraqi representatives from politics and business to hold talks in Hamburg and Berlin from 12 to 18 May, 2019.
June 6, 2019 Ordering Information 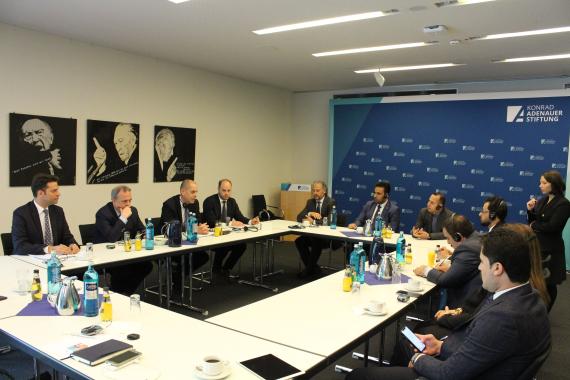 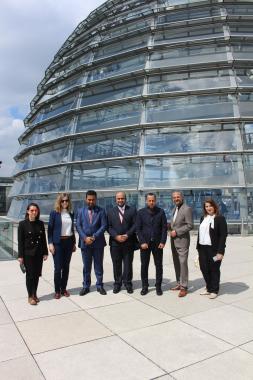 The Delegation Visiting the German Parliament 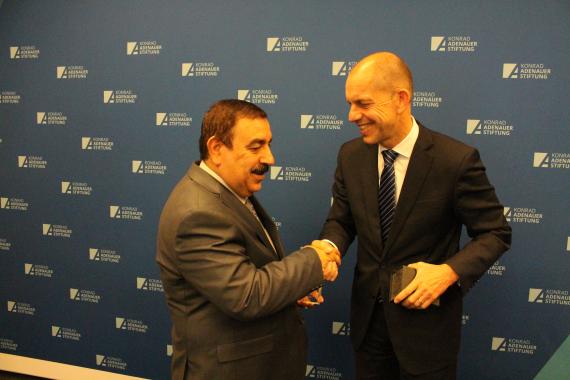 The Governor of Anbar, Ali Farhan, with the Deputy Secretary General of KAS Dr. Gerhard Wahlers

The delegation was led by Ali Farhan, Governor of the Anbar province of Iraq. Ayman al-Aswad, Advisor of the Governor for Foreign Policy and International Organizations, Dr. Mohamed al-Shummary, Foreign Policy Advisor to the Head of the al-Hikma Movement, Ammar al-Hakim, and Ms. Rafeef Muayad Hadid, Deputy Director-General of the Banking and Credit Department of the Iraqi Central Bank were also part of the delegation. Additionally, two security and business experts further enriched the group: Hisham al-Hashimi, Security Expert from the Facilitators Network of Iraq and Ayman Hussein al-Faisal, Research Associate at the Al-Bayan Center for Planning and Studies.

Following the military victory over ISIS, Iraq still remains in a fragile state. Although Prime Minister Abdul-Mahdi is making tentative progress with his reforms, the economic situation is stagnating. Furthermore, the growing tension between Iran and the US poses a new, major challenge for Iraq. Iraq’s role as a stabilizing factor in overcoming these tensions is now more in demand than ever.

Part of the program in Hamburg were talks with Daniel Jahn of the Hamburg Port Authority, who highlighted the development of the Port of Hamburg as an economic engine for Europe. With Dr. André Bank of the GIGA Institute for Middle East Studies, the delegation discussed the security situation in the border areas of the Anbar Province and the potential danger posed by remaining ISIS fighters. In addition to the delegation’s economic focus, it was another goal for the members to learn more about the federal system of Germany. Michael Westenberger, European and Economic Policy Spokesman as well as Stefan Weidelich, Press Spokesman of the CDU Parliamentary Group, introduced the guests to the topic.

In Berlin, the participants discussed in particular the stabilization of Iraq with a focus on the economic development of the country and the promotion of foreign investments. Possible reintegration projects for families of ISIS members and the situation of internally displaced persons were subject of conversation with a member of the parliament, Thomas Erndl, and with the head of the Foreign, Security and European Affairs Team of KAS, Nils Wörmer. These talks took place in the Bavarian State Representation. The delegation discussed the conditions for a possible return of Iraqi refugees from Europe with members of the Committee on Economic and Energy Affairs, Dr. Joachim Pfeiffer and Klaus-Peter Willsch, both members of the German parliament. Which conditions – such as the legal framework, transparency, and the fight against corruption – the Iraqi government would have to ensure as an incentive for potential foreign investors was the topic of discussions with representatives of the Federal Foreign Office, the Federal Chancellery, the Federal Ministry for Economic Affairs and Energy and the Federal Ministry for Economic Cooperation and Development. During talks with Dr. Gerhard Wahlers, Deputy Secretary General and Head of the Department of European and International Cooperation at KAS and Thomas Birringer, Head of the Middle East and North Africa team, the importance of a close cooperation with the local partner was emphasized, the discussion furthermore touched upon the subject of new scholarship programs for “Think Tanker“ and various other domestic issues. The participants learned about the effects of the recently signed roadmap with Siemens and the possible implementation of energy projects over the next few years from Axel Brugger, Senior Director of Government Affairs and Hans-Conrad Heineke.

The Iraqi delegation expressed its gratitude for the German engagement in Iraq and its desire to further deepen German-Iraqi relations. Besides a strengthening of the economic ties, they particularly asked for more German support in the fields of counter-terrorism, the disarming of militias, the strengthening of Iraqi institutions, the reconstruction of newly liberated areas, economic reforms and the development of civil society. The German representatives emphasized that Germany wished to remain an important partner for Iraq and is willing to commit to a long-term and sustainable engagement in the Iraq.