Reintegration of Former Militiamen in Basra

In the Province of Basra in southern Iraq, there are more than 44 armed factions, consisting of thousands of young men who answered the religious call (Fatwa) to liberate Iraq from the Islamic State. The mental and emotional health of these young men was highly affected by the violence they witnessed in the battlefields, which makes their reintegration into civil life challenging.
October 12, 2018 Ordering Information 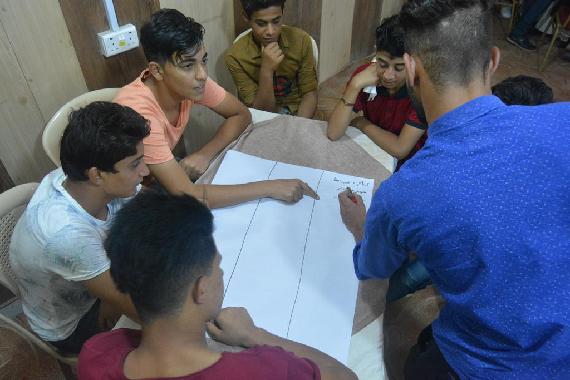 In 2018, the Syria/Iraq Office of the Konrad-Adenauer-Stiftung (KAS) partnered with the Al-Firdaws Society in Basra to support the civil reintegration of former young militiamen by engaging them into civil society activities. In order to make sure they get through to their target group as much as they can, Al-Firdaws decided to have six young civil society actors – people from the same peer group – conduct the workshops with the young militiamen. To do so, Al-Firdaws first implemented a training of trainers for the selected civil society actors, involved in peacebuilding, conflict-resolution and gender issues. The newly trained trainers then proceeded to prepare workshops on these different issues for the former militia fighters. In all training a male and a female trainer were present, making sure that all perspectives of the trainings were covered. As aimed at by Al-Firdaws, having trainers from the same age group as the participants, increased acceptance of the knowledge transmitted and removed potential barriers of communication between the trainers and their trainees.

The project helped former militiamen to positively change their mindset about their return to civil life and to facilitate their peaceful and smooth reintegration into society. Particularly, it served the purpose of condemning violence, especially against women. The reduction of violence against women and the therefore decreased risk for their well-being will in the long-run encourage them to have their voice heard. By proving to the former fighters the important contribution they can make in their civil life, the project tried to give them a new purpose within society, make them regain a positive social status, a sense of pride and power through activities for the common good. By improving their self-esteem and self-confidence, the workshops contributed to reducing the frustration and anxiety from unemployment and a generally low income that usually makes reintegration difficult.