“Security is not a commodity”

At the opening of the 8th Adenauer Conference Annegret Kramp-Karrenbauer, Federal Minister of Defence and Head of the CDU, took part in a live-streamed discussion with the Chairman of Konrad-Adenauer-Foundation (KAS), Prof. Dr. Norbert Lammert, and Dr. Jana Puglierin, Head of the Berlin Office of the European Council on Foreign Relations (ECFR). They spoke about issues like the consequences of COVID-19, challenges for transatlantic relations and Europe’s role in a global strategic competition.
June 17, 2020 Ordering Information 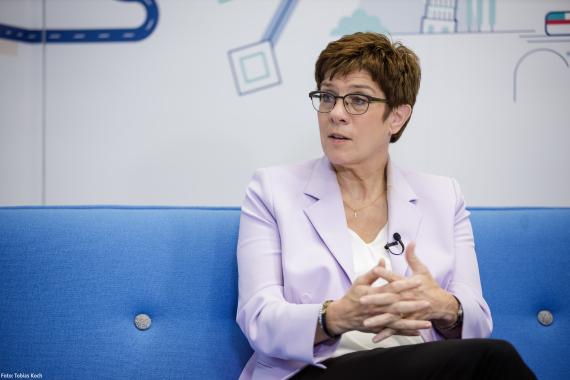 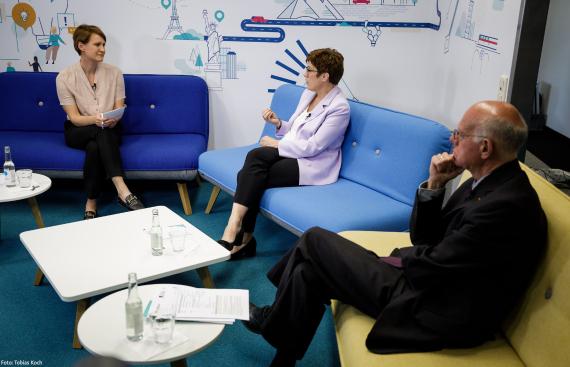 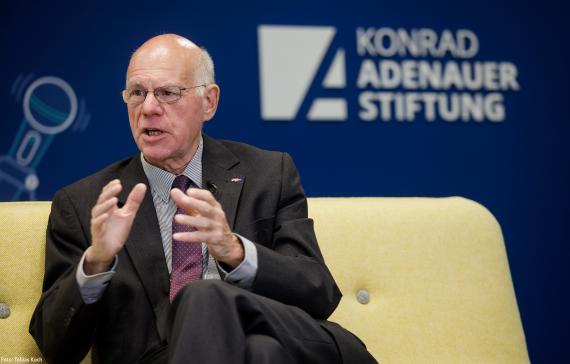 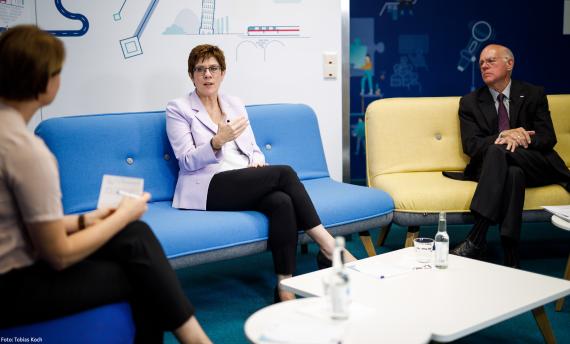 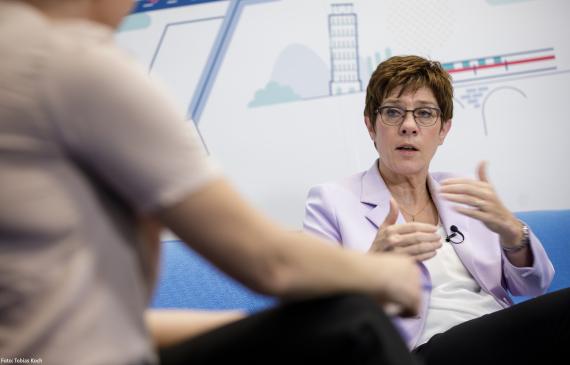 In the light of the spread of the coronavirus over the last few months, the Minister of Defence stressed right at the beginning of the conference that under such circumstances it had been a special challenge to fulfil both the core mission of collective and national defence, and international commitments. Nonetheless, the Federal Armed Forces had successfully accomplished that. At the same time states like Russia and China were seeking to take advantage from the crisis by use of propaganda. Even Islamic extremism was attempting to benefit from the crisis, like for example in Iraq where terrorists had been able to gain more ground again. “The coronavirus has not given us a break in security policy”, was the conclusion drawn by Kramp-Karrenbauer. Instead the crisis made it necessary to work more vigorously on existing tasks.

Challenges ahead of the transatlantic relations

With a view to the current debate about a partial withdrawal of American troops, the Federal Minister once again underlined the importance, for Germany, of the support granted by the US and the security guarantees provided by NATO, and honoured their contribution to the fact that we live in peace and unity today. However the Alliance also offered added value to the US. American soldiers in Germany and Europe increased the security of the entire Alliance, including the United States. After all, NATO was founded on solidarity and trust, and represented shared values and interests. “NATO is not a trade organisation, and security is not a commodity”, said Kramp-Karrenbauer to stress that.

Nonetheless, Germany had to do its homework. According to her, it was in the country’s best interest to meet the German commitments within NATO, not just in terms of defence spending, but also with regard to the military capabilities made available by Germany in the Alliance. “Made in Germany” also meant that Germany honoured its pledges, affirmed the Minister. That is also true in times of the coronavirus.

Strengthening the European pillar of NATO

Kramp-Karrenbauer emphasised that stronger European co-operation was needed in the field of defence and security policy – “not as a plan B or alternative to NATO, but with the aim of strengthening the European pillar of NATO”. PESCO, the European peace facility and the European Defence Fund already offered sufficient opportunities in that regard. The current challenge consisted in translating all those individual items into a strategic compass. Therefore, that was also one of the tasks of the German Presidency of the EU Council beginning in July 2020.

Subsequently KAS Chairman Lammert stated that security was more relevant again today than ever, not least because old security problems had not disappeared with the end of the Cold War; instead additional threats had evolved like for example cybercrimes. So, for Konrad-Adenauer-Foundation, security affairs were a traditional priority of its activities, and a debate on security was important.

It was true that a political discourse on security and defence policy was more difficult in Germany than in other countries because of its specific history. However, the debate on the costs of freedom and security had to be held in a sincere manner; that view was shared by the Chairman and the Minister. “A part of our problem is that we have failed to discuss it for too long, taken it for granted too often”, concluded Lammert. According to him, it was also part of the special German tradition that that debate had to take place in parliaments in particular. But it should also be held in society, while in that regard especially the younger generation was strongly interested and willing to do so, according to recent studies.

At the same time Kramp-Karrenbauer and Lammert jointly pointed to the fact that the international environment was also increasingly characterised by a strategic competition with regard to states like China and Russia. That did not only have an impact on defence politics, but also on the work of the Foundation. In that context the Minister of Defence stressed: “We are not neutral as a European continent.” Germany was not located somewhere between China and the United States, but was part of the transatlantic Alliance as a result of shared values – “that is why we clearly stand by that side”. In the face of the increasing competition between systems it was predominantly important to build resilience at the European level, for example against hybrid threats. But also, as Lammert stressed, by more strongly involving partners, like Australia, that share the same values.

Initial stocktaking after a year in office

Finally, the Minister of Defence took stock after her first year in office. When talking of recent achievements she referred to the enlistment oath made by recruits in front of the Reichstag and free travels by rail for those in uniform as showing the progress made with regard to the social acceptance of the armed forces. Nonetheless, Kramp-Karrenbauer still sees need for efforts in the field of the Federal Armed Forces’ material readiness and a need for Germany to take responsibility and a more active role in the world – challenges that the Minister looked upon as incentives at the same time. 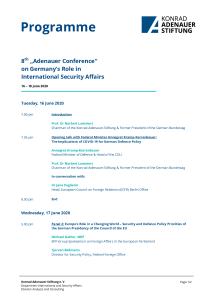