Hate Speech Monitoring by Journalists and Clerics in Iraq

Parallel to the efforts on rebuilding Iraq after the military defeat of the Islamic State (ISIL), there is a dire need to reconstruct the Iraqi social fabric in order to ensure peaceful coexistence among communities. Hateful rhetoric has been used not only by extremist groups but also by politicians, media representatives and religious leaders. This led to hate vocabulary and terminology penetrating the realm of popular culture, normalizing hate speech in socio-political debates and discussions. This, in turn, is exacerbating social tensions between ethno-religious communities who used to live together before the rise of ISIL.
October 12, 2018 Ordering Information 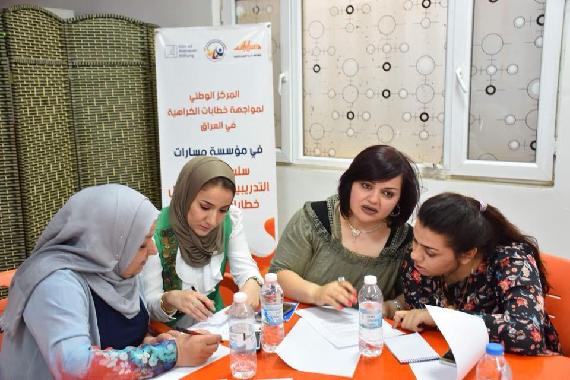 Women Representatives at the Masarat Training on Hate Speech

The Konrad-Adenauer-Stiftung Syria/Iraq Office (KAS) and Masarat For Cultural And Media Development (MCMD) established the Iraqi National Center against Hate Speech in March 2018. Building on this, both organizations pursued their cooperation on this crucial topic to launch a training series in the whole of Iraq. Targeting mostly journalists and clerics or religious leaders, the two-day trainings focused on the mechanisms to identify and monitor hate speech and on ways to counter it. They took place in 13 governorates in Iraq, namely Baghdad, Babylon, Najaf, Karbala, Basra, Thiqar, Waset, Anbar, Mosul, Sinjar, Dohuk, Erbil, and Sulaymaniyah. The trainers were selected from a pool of people from different religions and ethnicities who had attended a training of trainers on hate speech conducted by MCMD, with the support of KAS, in 2017.

A guide to counter hate speech was distributed to the participants in the trainings, so that they always have a reference to consult when being confronted to hate speech. This also serves as an instrument for them to spread the knowledge they gained throughout the workshops. The trainings finally contributed in creating a network of more than 800 journalists and clerics all over Iraq who are currently monitoring hate speech occurrences in the Iraqi public discourse, be it in media or political speeches. The results of the monitoring procedure are being collected and summarized in a regular report put together by the Iraqi National Center against Hate Speech.