Konrad Adenauer was born on 5 January 1876 in Cologne. He was one of four children and grew up under rather humble circumstances. In 1894, he obtained his school-leaving certificate (Abitur) and commenced an apprenticeship as a bank clerk. Afterwards, he studied law at the universities of Freiburg, Munich and Bonn. After completion of his period as a junior official at the office of the Public Prosecutor attached to the Cologne District Court, he joined a law firm in Cologne in 1902.

Born into a catholic family, Konrad Adenauer joined the Centre Party, the party of political Catholicism, very early in his life. His political career began in 1906, when he was appointed full-time deputy councilor of Cologne’s city council. Three years later, he became deputy mayor of Cologne. Adenauer’s creativity and acumen helped him hold his post even during the First World War. He was put in charge of food supplies in the city of Cologne. In 1917, the Mayor of Cologne was appointed State Secretary. Adenauer took over his position and thereby became Prussia’s youngest mayor.

His professional success, however, was overshadowed by fateful events in his personal life. In 1916, he lost his wife, who had borne him three children. Adenauer himself was injured in a severe car crash which held him hospitalized for months.

During the days of the Weimar Republic, Konrad Adenauer was one of the most influential political figures in Germany. He made a name for himself by progressively developing Cologne into the 'metropolis of the West'. The reestablishment of Cologne University (1919), the conversion of the city’s former fortification into a green belt, the revival of Cologne’s exhibition, the extension of the port facilities on the River Rhine, the erection of a further bridge across the Rhine, and the settlement of industrial enterprises are all accredited to his term of office.

His influence spread beyond regional boundaries when he was appointed President of the Prussian State Council in 1921, an office which he held until 1933. Repeatedly, he was mentioned in government circles as one of the candidates for the office of Chancellor in the periodic crises of the Weimar Republic. In conjunction with his fundamental federalist, Christian, and social convictions, his republicanism turned him into an object of hatred among the adversaries of the Weimar 'system'. Therefore, when the Nazis seized power in 1933, he was immediately divested of his office as Lord Mayor of Cologne and was banished from his hometown.

Together with his family, Adenauer survived the years of war and the Nazi tyranny in a small town near Bonn called Rhöndorf. The Americans who emerged victorious reinstalled the 69-year old as Lord Mayor of Cologne. Yet only a few months later, he was dismissed from office by the British military government, which was in charge at the time, due to his criticism of their occupation policy. From that time forward, Adenauer put all his efforts in his activities in the Christian Democratic Union (CDU), which he had become a member of shortly after its foundation.

The most crucial step towards the top of the nascent Western German political system was his election as President of the Parliamentary Council, which was established in 1948 at disposition of the three Western allied powers in order to draw up the constitution of the Federal Republic of Germany (Grundgesetz). On 15 September 1949, Konrad Adenauer was elected as Chancellor by the CDU/CSU faction of the first German Bundestag. He remained in this position for the next 14 years.

The governments he led prepared the grounds for successful construction of a new democracy. Some epoch-making decisions will remain connected to the 'Adenauer era' forever. In foreign politics, these include the achievement of national sovereignty, the establishment of close ties with the free West, the reconciliation with France and the unification of Europe. As for domestic politics, they include the integration of refugees and displaced persons as well as the construction of a social market economy as a novel economic order, which allows the fusion of free competition and the responsibilities of a social government. Germany’s 'economic miracle' could not have been possible without the guarantee of internal social peace within the country.

At the general elections of 1957, the CDU/CSU headed by Adenauer won the absolute majority of the votes cast – probably a one-off success in the political history of Germany. Having been elected Chancellor once again by a coalition of CDU/CSU and FDP in 1961, Adenauer stepped down in the middle of the legislative period in conformance with a previous agreement. In 1966, he resigned as Federal Chairman of the CDU. When he died aged 91 on 19 April 1967, he received worldwide honors as a statesman who provided freedom, prosperity, and social security for the citizens of the Federal Republic of Germany. Konrad Adenauer lies buried in a humble family grave in a cemetery in Rhöndorf. 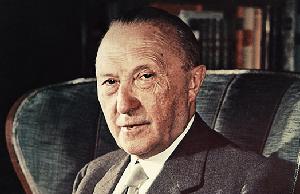