We are delighted to announce the 6th Edition of its flagship convening “The Uganda Social Media Conference”. The conference which brings together key stakeholders from government, civil society, academia, and the media for an exchange on the state and impact of social media on society is set to be held virtually in August 2021 on 25th – 26th, at Kampala Sheraton Hotel.

Together with Goethe Zentrum Kampala (GZK), we are planning to remember the construction of the Berlin Wall, 60 years ago with an ONLINE event under the theme; ‘The Rise and Fall of the Berlin Wall’. This will take place on 13th August 2021. Visit our social media pages for more updates on the event.

Uganda is one of the countries where the impact of corruption causes considerable political instability and furthermore represents a hindrance for social and economic development. In order to achieve improvements in transparency and accountability as well as curbing corruption, journalism needs professional journalists capable of understanding transparency and governance issues through conceptual frameworks and tools.

Members of the KAS supported Young Leaders Think Tank for Policy Alternatives have held a meeting with the Deputy Speaker of the Ugandan Parliament, Rt. Hon. Jacob Oulanyah. They presented to him several policy alternatives for promoting youth employment in Uganda.

New Cooperation with the Salesians of Don Bosco

A workshop in Maridi for youth and women marked the beginning of a new civic education programme that KAS is implementing in South Sudan in collaboration with a new partner, the Salesians of Don Bosco. 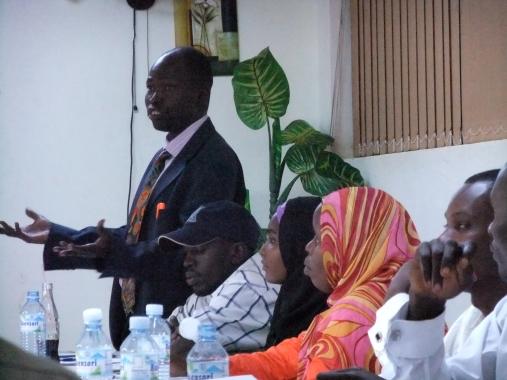 Trends, Challenges and Prospects of Deepening Democracy at the Local Level

Civil society, political party activists and local government leaders in Mbale district emphasised the need to continue a dialogue on issues of democracy and development. This consensus was reached during dialogue at Masaba Hilltop hotel facilitated by the Konrad-Adenauer-Stiftung, July 21, 2011.

Social Market Economy as an Alternative Approach to Poverty Reduction?

At a public dialogue organised by Makerere University Convocation (MUC) and Konrad-Adenauer-Stiftung (KAS) leading representatives from the academic as well as the political sphere discussed whether the concept of Social Market Economy could represent an alternative approach to ensure inclusive growth and poverty reduction in Uganda. They largely agreed that a mixture of free market and the creation of a social balance through state intervention in cases of market failure is the way forward.

With the overall aim to train elected party representatives in the understanding of political party functions and the importance of party structures in the co-ordination and recruitment of members, the Foundation for African Development (FAD) has conducted a training programme for district political party leaders from 12th to 13th July in Soroti. The two-day workshop was supported by Konrad-Adenauer-Stiftung.

In Uganda like in many other African countries the radio is of enormous importance as a primary source of information for the population. This insight forms the basis for the pro-active integration of radio programs in the spectrum of KAS activities in Africa. During his visit to Northern Uganda the Deputy Secretary General of KAS, Dr. Gerhard Wahlers, got a personal impression of this type of work and could experience with how much enthusiasm community members at grassroots level discuss political topics and put forward their concerns in front of radio microphones.

At a conference organised by the Konrad-Adenauer-Stiftung the former President of Germany, Prof. Dr. Horst Köhler, discussed with leading Ugandan representatives from economy, politics and civil society about the principles of the social market economy and their relevance in the Ugandan context. He accentuated his optimism regarding Uganda’s future in spite of persisting problems such as poverty and unemployment. „I see among Ugandans the willingness to face the existing problems and the confidence in their ability to solve these problems “ Köhler stated.

The public dialogue in Mbale held by local representatives of politics, police, civic society and the media focused on human rights reporting as well as on concrete assaults of journalists. On basis of a theoretical training in the following workshop journalists produced stories about human rights violations on the ground.

The Inter–Institutions debate tournament of 9th April in Soroti was a competition between five institutions of higher learning. They included Islamic University in Uganda (IUIU), Kumi University, Uganda College of Commerce (UCC), the East Africa Civil Aviation Academy and the Comprehensive School of Nursing - Soroti. The debate which is part of a series was organised by ACFODE in cooperation with KAS. It was held along the theme: "Involvement of the youth in the promotion of gender equality”