Beyond the crisis - leadership at crossroads

Beyond the Crisis: Leadership at Crossroads

Bringing together young and emerging leaders from all over Africa. Tune in online! The event is held in cooperation with LeO Africa Institute 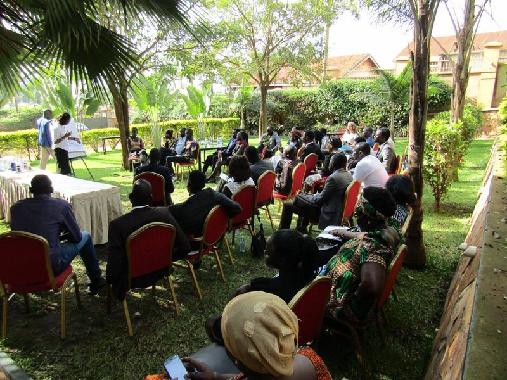 How can Chapter V of the South Sudanese Peace Agreement be implemented?

Our partner NoSSCOU (Network of South Sudanese Civil Organizations in Uganda) held a workshop for civil society organizations to strengthen their understanding of Chapter V of the Revitalized Agreement on Resolution of the Conflict in the Republic of South Sudan (R-ARCSS) and to support the peace process in South Sudan.

„Uganda‘s GDP is growing, but it is not leading to a structural transformation in society. Most of Uganda‘s citizens are still employed by the agriculture business,“ explained Max Walter, Executive Director of Center for Development Alternatives (CDA) during a press briefing on the Uganda’s economic transformation on October 10th in Kampala.

“There are not many countries that are as strong as Uganda when it comes to Decentralization. But it's not only about quantity but about quality. There are still some obstacles like lacking capacity to implement decentralization. Let use this conference to improve." said KAS Country Director Mathias Kamp during the ULGA National Dialogue on Decentralization held between 16th until the 18th September in Kampala.

The fourth edition of the Political Leadership Advancement project (PoLA-LAB) brought together 27 youth leaders in the central Uganda district of Mityana. PoLA-LAB is a mentoring program for political and community leaders that provides a training in advocacy, political economy analysis and social mobilization.

For the third time, the annual Interparty Youth Platform (IYOP) Football Challenge encouraged youth teams of eight political parties to engage with each other through sports. The annual tournament aims at promoting a spirit of peaceful co-existence and reducing violent political participation which is common among the youth.

In South Sudan, cultural diversity is often identified as one of the main problems in the ongoing civil war. Yet, culture is also one of the most underestimated social tools in conflict resolution. Because of this, members of different South Sudanese groups came together in Kampala to talk about the positive role of cultural diversity in South Sudan and how to use it to make the freshly signed Khartoum Declaration work.

On Friday, 31st of August, the new issue of Arise Magazine was officially launched during a networking reception, organized in partnership with Co-publisher Action for Development (ACFODE). In honor of the topic “The refugee Crisis, a Women’s Edition” representatives of the Office of the Prime Minister as well as ACFODE and different womens’ rights and refugee rights organizations were present to engage in a panel discussion.

Strategic communication, lobbying and networking are some of the fundamental elements in public policy research. Ideally, without these elements, a well-researched and well-written policy paper will remain meaningless if poorly communicated and to the wrong audience. Because of this, we dedicated our third Policy development seminar to this topic.

7th Aug 2018 marks an historical epoch in South Sudan’s history. Dozens, including warring factions both from government and opposition signed a peace agreement at the Friendship Hall in Khartoum with Presidents Museveni of Uganda and Omar Al Bashir of Sudan as guarantors.