A Transatlantic Answer to the Arab Spring?

Mr. Daul will be discussing the opportunities and and risks associated with the monumental change sweeping the Arab world, and how best the United States and Europe can assist these countries in progressing towards building stable democracies.
July 11, 2011

The Konrad Adenauer Stiftung is actively supporting civil societies in a number of Middle Eastern countries to promote development and democracy. To complement these efforts in the region, the Konrad Adenauer Stiftung in Washington seeks to provide a platform for a continuous transatlantic dialogue to develop a consistent approach by the transatlantic partners of the region.

As such, the Konrad Adenauer Stiftung held a discussion with a select group of representatives from Congressional staff, several think-tanks, non-governmental organizations as well as university scholars. The opening address was given by the Majority Leader of the European Parliament and Chair of the European People’s Party Group, Joseph Daul, MEP.

“The significance of 1775 for the United States can easily be compared with the significance of 1789, 1848, and 1989 for Europe. All these dates mark history because they were the occasions of revolts of populations that felt oppressed, who fought against what they considered to be tyranny and injustice. Whatever may come in the wake of the Arab revolutions, history will continue to be written,” said Mr. Daul in his opening remarks (Mr. Daul’s full speech is attached).

The subsequent dialogue between the seven European Members of Parliament and the various U.S. discussants was moderated by Mr. Elmar Brok, Chairman of the Delegation for Relations with the United States in the European Parliament. Shared concerns were raised among other things about the government crackdown on peaceful demonstrators in Syria and the ongoing military campaign underway in Libya.

Syria: The discussion focused on the question of what role, if any, the West could play if the Syrian government refuses to provide economic stability and democratic reforms for its citizens. In this regard, participants discussed whether the notion of non-interference is a false notion. For instance, what is the role of the West when the lives of citizens in specific Middle Eastern countries are no longer being protected but in fact are targeted by their own government’s security forces? Is there a military remedy, such as the one being used in Libya, or is there a more reserved and diplomatic way of influencing opinion without the threat of military action. One example mentioned during the discussion was whether or not Russia and China should be pressured more to allow the Security Council to officially condemn the security crackdowns on peaceful demonstrators. Other concerns ranged from what impact a successful revolution that would remove the current regime might have on minorities in Syria, such as Christians and Jews - specifically referring to the mass exodus of Christians from a theoretically now more liberal and democratic Iraq and the increasing tensions between Christians and Muslims in Egypt.

Libya: The discussion also touched upon the military action in Libya, as some participants supported the mission as a way of avoiding another Rwanda, while others condemned it as a military blunder similar to the invasion of Iraq. Participants discussed the ramifications of the military actions on the citizenry of Libya, and whether or not the prolonged military campaign is a sign of tribal dysfunction. In other words, the fear is that the Libyan rebels are not as much concerned with removing Gaddafi as they are with consolidating power, under the guise of a democratic revolution. Members were very concerned that if the situation in Libya is not resolved, i.e. the removal of Gaddafi, then the entire country may start on a humanitarian and economic downward spiral that would turn Libya into another Somalia. The humanitarian disaster and the flood of refugees that would then follow would be devastating to Europe economically and politically. Therefore, while some participants acknowledged that the military campaign may not have been the most prudent choice, overall, there was unanimous agreement that the democratic revolution in Libya must not be allowed fail. The failure of the West to help support Libyan democratic efforts would be disastrous to the reputation of the West in the Middle East, and would most assuredly hamper or prevent any future relationship between the West and the Middle East that would be built on trust. The Middle East expects not just words now, but concrete deeds.

Conclusion: The discussion concluded with a description of options available to the West that would seek to bolster fledgling democratic governments while at the same time avoiding the creation of a country dependent on foreign aid or foreign military intervention. Trade was discussed as a primary vehicle that could ensure such economic improvement and democratic stability. Doubt was raised if the West could influence major societal changes necessary for building democratic societies. Moreover, with countries such as Tunisia and Egypt now experiencing economic downturns, the chances of new waves of migrants to Europe is increasing. EU participants mentioned how this should no longer be described as a humanitarian situation but rather be considered a security policy situation. Participants also discussed the chance now being offered to Europe and the U.S. to help the Middle East turn the corner as Europe once did in 1989. The West must not just deliver monetary aid, it must ensure that the monies are directed at specific areas and functions, ensuring proper transparency and focusing the spending on projects that sustain economic development in the long run.

While Western influence may seem to be in a relative decline, some countries such as Brazil, China, India but also South Africa are increasing their global profiles. While more open and democratic markets are always a benefit, there is the fear that the economic priorities of these countries may trump their belief in universal human rights and values. Therefore, more than ever, it is imperative for the West not to fail. In addition, while the developments in the Middle East are of utmost importance, the changing strategic environment and the desire for regional hegemony by Iran is no less significant. The delivery of tanks to Saudi Arabia is therefore not to be interpreted solely in the context of supporting democracy, but also in the context of the growing influence of Iran.

It was apparent in the discussion that more extensive dialogue is necessary in order to develop and implement a consistent approach to supporting both democratic reforms and economic developments in the Middle East. The Konrad Adenauer Stiftung event provided such a forum that facilitated an exchange between high ranking representatives from political, academic, non-governmental organizations and think tank communities. The Konrad Adenauer Stiftung in Washington plans to organize more events supporting the transatlantic dialogue on the developments in the Middle East in the future. 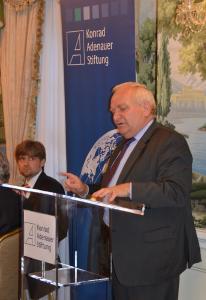 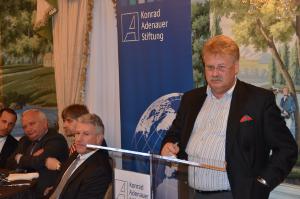 Elmar Brok, MEP and Chair, Delegation for Relations with the United States 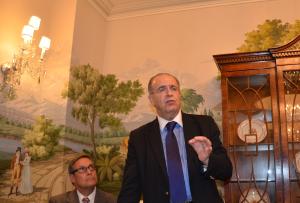 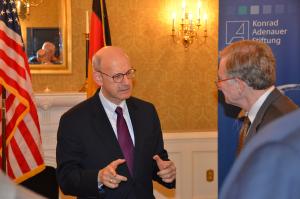 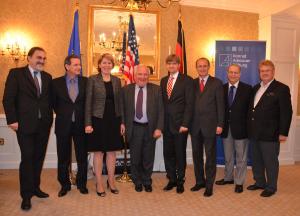