The United States and Germany over the past 20 Years

In the last few years, the Obama Administration has been perceived as looking for partnerships outside of Europe. Jackson Janes from AICGS and Matt Lewis from the Daily Caller give their view on the developing relationship.
July 19, 2011

In the last few years, the Obama Administration has been perceived as looking for partnerships outside of Europe. Moreover, observers have noted that there are possible signs of isolationist tendencies, heavily influenced by economic factors. To maintain robust transatlantic relations, the Konrad Adenauer Stiftung in cooperation with the American Jewish Committee engaged young German political and civic leaders and held a seminar on the current issues effecting social, cultural, political and economic life in the United States and Germany. Participants in the discussion included Dr. Jackson Janes, Executive Director of the American Institute for Contemporary German Studies, and Matt Lewis, Senior Correspondent for the Daily Caller.

Dr. Janes opened the discussion with a brief description of the historical relationship between the United States and Germany within a political-historical context. The discussion touched upon the importance of the German-American bond and the rationale behind it. Before 1989, Germany was seen as an object of concern to American foreign policy, while today, it is viewed as a subject of American foreign policy.

The fact is that today, Germany and Europe as a whole, are part of a much larger matrix through which the U.S. pursues its foreign policy objectives, and the immediate concerns (far and near) drive U.S. and

German relations. The U.S. and Germany are far more integrated within the global framework, and a

crisis on one side of the globe may imperil a country on the other side.

Concerns were raised, however, particularly with regards to the role that Germany and the E.U. will

development. The concern is that the transatlantic community may not be up to task to deal with these

problems on their own. Member states are more and more questioning their own separate roles in

NATO and their involvement in Libya, as well as their economic development potential (or lack there off) within

the Euro Zone. A major concern that is now being voiced in the U.S. is that while the E.U. may still be united economically, it speaks with a multitude of voices when it comes to foreign policy decisions. This lack of cohesion

on foreign policy, taken together with the fact that economic conditions may force the U.S. to scale

down its military operations, leave Germany and Europe in a precarious position of needing to take on a

Mr. Lewis reflected on the current U.S. position on the global stage and acknowledged that the U.S is

now responding conditionally to global issues based on current budget constraints. For the U.S., the

elections. The discussion revolved around the fact the no U.S. president has ever been reelected

Reagan). Historically, the cards are stacked against President Obama. Barring a foreign policy fiasco, the

economy, the unemployment situation and the national debt will still be at the forefront come 2012.

Mr. Lewis also summarized the potential impact of potential Republican contenders and would-

Obama. Particularly, Mr. Lewis described the current field and the projected leaders, such as former

differences in conservative candidates when it comes to tradition versus fundamentality. The traditional

conservatives rely to this day on the evolution of political ideas through the progression of U.S. law

and judicial precedents. Fundamentalists seek to interpret the original intent of the U.S. constitution,

choosing not to rely on judicial traditions or the progression of U.S. law. The fight between the

within the Republican establishment. The current wisdom is that the winning ideology will choose the

candidate that will challenge President Obama.

From the discussions, it became apparent that The Konrad Adenauer Stiftung must continue to provide

dealing with the political and economic issues that threaten and imperil the U.S., Germany and the E.U.

and promote the transatlantic dialogue initiative. 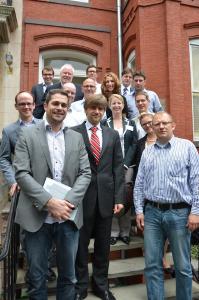 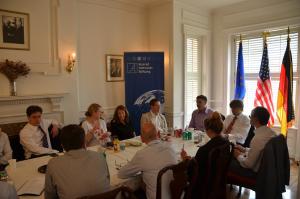 Matt Lewis in discussion with the KAS-AJC Group 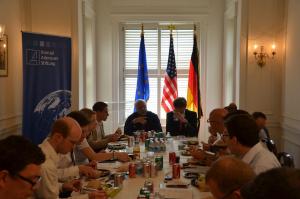 Jackson Janes in discussion with the KAS-AJC Group