Struggles for Freedom in East Germany and 2011's Arab Spring – “What was possible then is also possible today."

The Konrad-Adenauer-Stiftung, in cooperation with The Potsdam Foundation and the Goethe-Institut, held a screening of the documentary "The Burning Wall," followed by a discussion with civil rights activist Günter Nooke.
September 29, 2011 6PM Clock

On the occasion of the 50th anniversary of the construction of the Berlin Wall and the Day of German Unity celebrated on October 3, the Konrad Adenauer Foundation in cooperation with the Potsdam Foundation and the Goethe-Institut, presented the award-winning movie “The Burning Wall” by Hava Kohav Beller. More than 100 attendees from the United States, Germany and the Middle East participated in the screening and subsequent discussion of the film with civil rights activist Günter Nooke, a former member of the opposition movement in the German Democratic Republic (GDR).

The film, which won the Best Documentary Award at the 2002 Hollywood Film Festival and the Best Feature Documentary at the 2003 Anchorage Film Festival, examines the motivations of individuals to stand up for freedom and civil rights despite severe repercussions by repressive state authorities. It depicts the developing opposition from the first stirring of single acts of resistance by individuals, through an emerging dissident movement, all the way to the astounding ground swell of defiance that brought down the Berlin Wall and resulted in the collapse of the GDR regime. Following the screening, Günter Nooke, who was interviewed in the film as a member of the opposition movement, Peter Hughes and Dr. Lars Hänsel participated in a lively discussion with the audience.

Even today Günter Nooke actively espouses freedom and human rights, and that is evident in his current work as the German Chancellor’s Personal Representative for Africa. When asked about the Arab Spring demonstrations, Mr. Nooke explained that a direct comparison to the turnaround in Germany in 1989 would be rather difficult. The protests in the Arab World showed that peaceful demonstrations may bring about a regime change. Still, it is uncertain whether in the end freedom and democracy will prevail as it did during the peaceful revolution in 1989. Mr. Nooke seemed to be optimistic, saying “What was possible then is also possible today.” He also pointed out how social media, which was not at the disposal of the former GDR opposition movement, did make a difference. In the Arab Spring, social media tools such as Facebook and Twitter were important means of communication for the protestors. Thus, it was relatively easy for them to organize an opposition movement and to mobilize a large group of people.

Against the background that many writers, musicians and actors appeared in the film, Mr. Nooke also considered the role of artists in the GDR opposition movement. In his opinion, it was first and foremost this group of people which played an important role by using their prominence and influence to voice opposition to dictatorships. In the former GDR, many artists opposed the severe restriction on freedom of expression and civil rights and were able to communicate their critique through their art to a wide mass of people.

Dr. Lars Hänsel, who studied theology in Leipzig at the time of the peaceful revolution, emphasized the importance of October 9, 1989. The feeling of the citizens since the suppression of the protests of June 17, 1953, was that any attempt to stage future protests would be violently suppressed. It certainly contributed to a feeling of helplessness among the public. Few thought they would be able to bring change through opposition, but this feeling was altered by the events of October 9, 1989. Only a few days before, Egon Krenz came to power. He was known for opposing Gorbachev’s idea of Perestroika and for sympathizing with the violent suppression of the Tiananmen Square protests. After the demonstrations on October 9 proceeded peacefully, the spell was broken; more and more people were encouraged to go to the streets and call for freedom.

Mr. Nooke also remembered the strained relationship between the people willing to leave the country and the opposition members, who wanted to deliberately support change in the former GDR. The two groups of people who had previously been at odds were actually brought closer together, especially in Leipzig, through the freedom prayers in the Nikolai-Church and the Monday Demonstrations. Mr. Nooke emphasized that the people willing to leave played a particularly important role at the end of the 1980s. The culmination of events came in 1989 when the political leadership of the former GDR was not able to counter the mass exodus over the summer. The opposition members’ hope and vision of a new society was eventually not fulfilled. Nevertheless, in today’s unified Germany everyone lives in freedom thanks to a successful peaceful revolution, an outcome which remains to be seen today for the Arab World.

The screening and discussion showed that the pursuit and struggle for freedom still plays an important role in current debates and developments, raising great interest. With the film screening, the Konrad Adenauer Foundation contributed to the discussion about the experiences of the peaceful revolution in 1989 and the current developments in the Arab World. Although a comparison may be difficult, it is apparent that the desire for freedom is a universal aspiration. 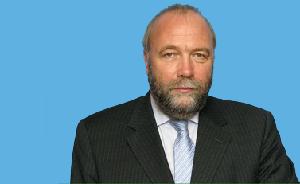 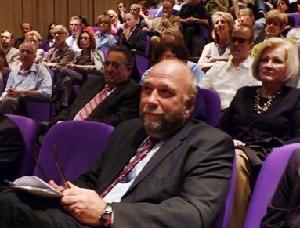 self-produced
Günter Nooke joined more than 100 participants from the United States, Germany and the Middle East for a screening of "The Burning Wall" and a discussion of the struggles for freedom in East Germany in 1989 and during the Arab Spring of 2011. 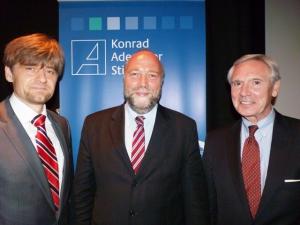 self-produced
Lars Hänsel, Günter Nooke and Peter Hughes talked with participants about the film and their own experiences with the 1989 protests in East Germany.