Leadership, Succession Planning, and its Implications for Germany's Role in the World

CSIS-KAS Series: Germany at the End of the Merkel Era

U.S. Elections and Its Implications for Transatlantic Relations

How the Pandemic impacts the News Media

How to Reinvigorate and Further Strengthen the Transatlantic Partnership?

The Rise of the Millennial and Minority Vote

KAS USA will again participate in the European Student Conference (ESC) 2020, the annual meeting of KAS scholarship holders studying in the USA and participating in the conference.

Quality Reporting in the Era of Fake News and Disinformation

The Cologne based RTL School of Journalism will visit Washington from March 24th to 27th for meetings organized by KAS USA with US-Think Tank experts, thought leaders and media correspondents. 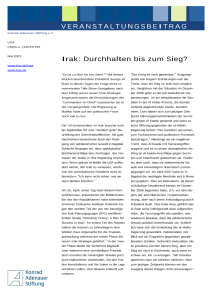 The War in Iraq – Staying the Course until Victory?

"It is too soon for a verdict." Those are the words President Bush chose in response to a recent interview question by a prestigious talkshow host about the success of his new Iraq strategy. At the same time, a new think tank report tried to beef up the American security offensive with new recommendations for the next phase of the new Bush strategy. To many in Washington, however, the war in Iraq seems already lost. After months of rangling between the Democratic majority in Congress and the White House, the showdown between the legislative and executive branch of the U.S. government reached a dramatic climax in Washington this week.(Commentary in German) 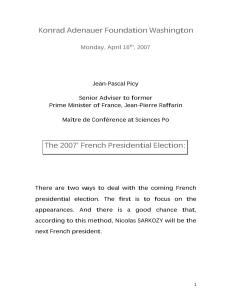 "The Presidential Elections in France"

The Implications for Europe and Transatlantic Relations 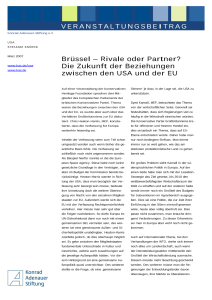 The Future of US-EU Relations

At an event hosted by the conservative Heritage Foundation three members of European Parliament of the British Conservatives talked about the US-EU relationship. Another discussed topic was the relationship between Great Britain and the European Union. (Event summary in German) 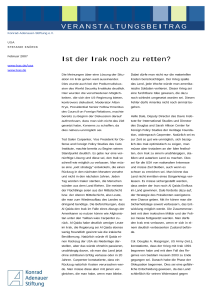 Can Iraq be “Fixed”?

Opinions diverge when it comes to discussing a solution for Iraq. This became apparent once again at a panel discussion hosted by the World Security Institute. The remaining options of the U.S. government were discussed controversially. Moderator Alton Frye, Presidential Senior Fellow Emeritus at the Council on Foreign Relations, pointed out that consensus would not be the aim of the event, since it would be impossible to reach.(Summary in German) 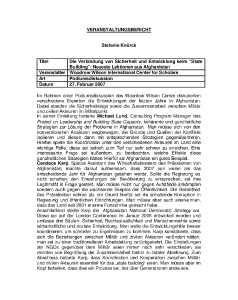 During a discussion at the Woodrow Wilson Center several experts analyzed the developments in Afghanistan during the last years. The discussion focused mainly on security and civil-military cooperation. (Summary in German) 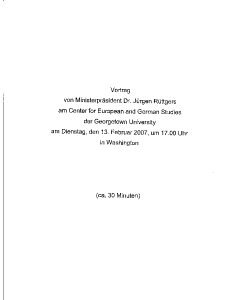 "Energy: questions of security of supply, dependence and environmental protection" (Speech in German) 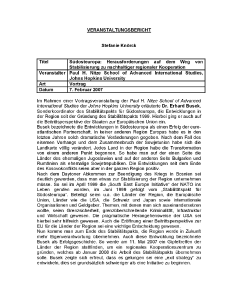 During an event at the Johns Hopkins School of Advanced Interantional Studies Dr. Erhard Busek, Special Coordinator of the Stability Pact for South Eastern Europe, explained the developments in the region since the foundation of the Stability Pact in 1999. He furthermore addressed the issue of the accession perspective of the states to the European Union. (Summary in German) 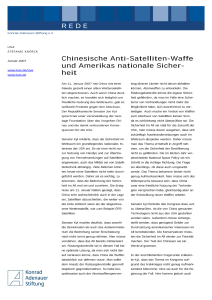 A Threat to U.S. National Security?

On January 11th, 2007 China tested an anti-satellite weapon by shooting down an old weather satellite. Even though China said it adhered to the peaceful use of space, there were protests across the world. At the Heritage Foundation, Republican Senator Jon Kyl talked about China’s approach and its consequences for the United States. (Summary in German) 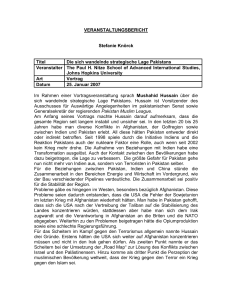 During an event at the Johns Hopkins School of Advanced Interantional Studies, Mushahid Hussain explained Pakistan’s changing strategic environment. Hussain is the chairman of the Foreign Relations Committee of the Pakistani Senate and the secretary general of the ruling Pakistan Muslim League.(Summary in German) 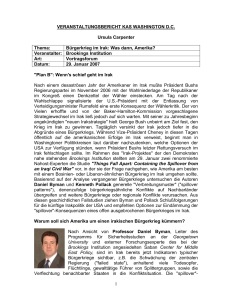 Containment Options for the United States

In case President Bush’s new Iraq plan should fail and Iraq cannot be saved, the United States has to prepare for the question how to „manage“ the consequences of an Iraqi civil war. A Washington think tank with close ties to the Democratic Party just released a study proposing a containment policy for a potential civil war in Iraq. But President Bush is also facing criticism from his own party as well as calls for a more reality-based Iraq policy. (Report in German)