Challenges of International Health Policy from a Transatlantic Perspective

Since the outbreak of Ebola, the international community was recently reminded about the great importance of international collaboration in the fight against pandemics. German Federal Minister of Health Hermann Gröhe, MdB outlined the many global health issue during a KAS event with health care experts. Health care policy has become the center of international relations.
March 11, 2015 Ordering Information

According to Mr. Gröhe, the German federal government has developed a concept that draws attention especially to international health care challenges. This is a matter of humanitarian aid on-the-ground but also containing diseases, which otherwise will spread throughout the world.

Health Minister Gröhe was leading a federal health delegation accompanied by the Chair and Vice Chair of the Health Committee in the Bundestag and high-level members of the Ministry. He addressed his remarks to an international audience with high-ranking representatives of the U.S. administration, U.S. Congress, organizations such as the World Bank, the IMF and the IADB. At the beginning of his speech he outlined the German government’s priorities to promote global health as documented in the 2013 health care concept. In view of the upcoming German chairmanship of the G7, Gröhe emphasized the key role global health will take on the agenda. Here he took note that special focus must be taken on the poorest countries in the world to better assure free access to health care. Global problems can only be solved, if adequate health services are provided on a local level.

In particular the Ebola outbreak has shown that a dysfunctional system in structurally-disadvantaged regions are oftentimes not able to handle a large amount of patients. This can lead to a pandemic even if a region is normally capable of containing the spread of an infection. Therefore it is important and necessary to strengthen the international and transatlantic cooperation to prevent an area-wide outbreak. Minister Gröhe accentuated that “there will be another pandemic and the question is are we ready for it.” The United Nations and the World Health Organization (WHO) will play a key role in the process, as they can define the dangers, and outline policies to combat such large outbreaks. To better react to these global challenges, there is a need to reform the WHO accordingly. The WHO ought to take on a stronger role, to lead the discussion of international global health policy and to better coordinate among the many national players. The German government is already working closely with the United States to attain this goal.

The Minister, drawing on many years of political experience in the humanitarian field, addressed the increasing threat of antibacterial resistance. In his opinion the cause for such a resistance is directly linked to the unnecessary medical and non-medical usage of antibiotics. This is leading to an ever-increasing ineffectiveness “of one of our most effective defenses against common and normally curable bacterial infections.” This is a global problem, since it affects both industrial and developing countries; international trade and travel has broken down any form of borders. Therefore, Minister Gröhe stressed the importance of an immediate collaborative action, as otherwise the world will face a period without effective antibiotics. This will lead to enormous health disasters with humans dying of diseases that are curable still today. The German government is convinced that antibiotics in general should be subject to prescription whether for humans or animals.

During the discussion afterwards the guests were able to delve into this issue more. It was also possible for the Minister to answer questions beyond the topic at hand that were nevertheless linked to health policy. Minister Gröhe was able to express his point of view on the ongoing TTIP negotiations. This forum, that was hosted by the Konrad Adenauer Stiftung, allowed for an in-depth discussion with an American audience with focus on global health challenges. US health experts were given the opportunity to exchange ideas to further common solutions for a future global health care policy. 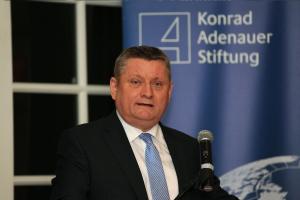