Undertaken by The Frontline Group, this study was commissioned by the Democracy Development Programme (DDP) in March 2021. The guiding objective of the study was to identify the characteristics, conditions and challenges faced by migrant entrepreneurs in the Durban region. The study aimed to lay the foundations for improved cooperation between migrant entrepreneurs and host communities.
22 août 2022 Informations de commande

Key recommendations emerging from the study
are:

(a) There is a fundamental need for State institutions to
acknowledge xenophobia as a problem distinct from broader
criminality. While acknowledging this distinction may be
politically contentious (not least since some political actors use
anti-immigrant nationalism to boost their own popularity), a
failure to do so will mean that migrants – and their businesses
– are unlikely to be provided with the targeted support
required to ensure their security. Civil society organisations
have a vital role to play in pressing State actors on this point
in collaboration with the media, which itself often fails to fully
communicate the degree to which migrants are singled-out
for violence.

(b) As was argued by one of the KIs interviewed for this study, too
much of the work on social cohesion in South Africa is focused
on elite messaging and too little work is done trying to address
social cohesion and social capital building at communitylevel.
Bodies like the South African Social Cohesion and Moral
Regeneration Council, or other empowered civil society
organisations, should target social cohesion initiatives at
the ward-level. Doing so is likely the only way to tackle the
grievances that spill over into xenophobic violence.

(c) The processes associated with obtaining trading and
asylum permits and other relevant documentation must
be streamlined and made predictable. A more efficient and
predictable system for permit acquisition and renewal will
allow migrants to more effectively plan and it will remove
much of the uncertainty that makes migrants afraid to truly
invest in their businesses. Simple solutions such as allowing
migrants without a South African ID number to use an
alternative identification reference to register with SARS,
would go a long way towards placing migrant businesses
on the path to formalisation and growth. The challenge
around this recommendation is how to effectively incentivise
local municipalities and the Department of Home Affairs
to undertake this streamlining. Once again, civil society
campaigns – aided by media – that clearly communicate
the actual (and potential) economic impact that formalised
migrant businesses can have in catalysing economic growth,
could help press these issues more forcefully.

(d) There is a need to address the fragmentation that exists
in the civil society support provided to migrants and their
businesses. While the number of organisations providing
direct support to migrants are few, those that are engaged
tend to have too few resources to have an impact at truly
significant scale. There is a need for civil society organisations
to be aware of: a) who else is providing services to immigrants;
and b) what opportunities there may be for complementarities
if resources held by different organisations can be pooled.
Rather than working in isolation, there should be some effort
made to develop a civil society coordination council that
brings together agencies with common interests in migrant
issues. This coordination could include the development of
joint projects and joint work plans, as well as the creation of
joint advocacy campaigns that may be necessary for many of
the issues raised in this report to be addressed.

(e) Connected to the above, there is some evidence to suggest
that grant-based assistance to migrants and their businesses
can be somewhat successful in allowing migrants to
improve the quality of their operations. However, there
should be a broader consideration of different types of
modalities for providing development assistance. Microlending
and initiatives like micro-insurance (to cover the
costs of theft of goods/loss of property) could be highly
beneficial to migrants and would likely attract a high level
of uptake if they were co-created by development agencies
and migrants in a participatory manner. Similarly, there may
be avenues by which migrants – as long as they are excluded
from accessing formal finance – can engage in self-help
groups like Stokvels. Doing so, however, would likely require
outside facilitation to help build confidence and trust even
within migrant communities.

(f) The findings of the study provide useful insight into the
character and conditions of African immigrants in South
Africa. These insights should, however, form as a basis for
a nationwide study, at least covering the main immigrant
business locations across the country. A broader study
will serve as convincing empirical evidence to develop
responsive policy aimed at addressing the critical issues
that undermine meaningful integration of immigrant
entrepreneurs with host communities. 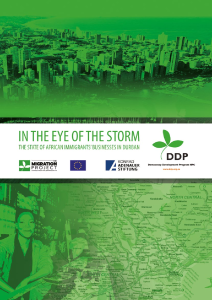 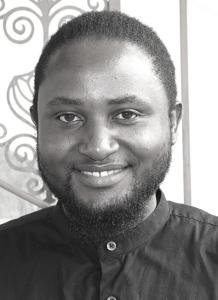