ASEAN Centrality in addressing the challenges in the Mekong sub-region

On September 27th 2022, the Konrad-Adenauer-Stiftung and the Institute for Foreign Policy and Strategic Studies (IFPSS) of the Diplomatic Academy of Vietnam jointly organized the second Mekong Forum about "ASEAN's centrality in addressing the challenges of the Mekong Sub-region". As the Mekong issue plays an imperative role for the whole Southeast Asian region, the ASEAN Mekong Basin Development Cooperation (AMBDC) was established in 1996. However, it has made no significant progress compared to other dynamic mechanisms in the sub-region.
2022/09/30 発注情報を

After Dr. Nguyen Hung Son, Vice President of the DAV gave a warm welcome to the guests, panelists and key note speakers, Mr. Simon Kreye, Deputy Head of Mission of the German Embassy to Vietnam framed the Mekong issue from a German perspective: Through its official development assistance, Germany has supported the Mekong River Commission as the most important of the respective organisations in the region both financially and by ways of consultancy work, to an amount of 67 million EUR since MRC’s creation in 1995. Thereby, German cooperation has contributed to the development of waterpower, enabling both poverty-reduction and protection of the environment, to the protection of less-advantaged populations against the negative impacts of climate change, as well as to the institutional strengthening of the MRC itself and to capacity building in the neighbouring countries. As outlined in our Indo-Pacific Guidelines, Germany will support the implementation of the MRC's Strategic Plan 2021 to 2025 and provide funding of close to 4 million USD for this purpose.

In the following, we were honored to hear keynote speaker Ambassador Bilahari Kausikan’s candid and critical opinion on ASEAN centrality and the Mekong issue. He explained that the meaning of ASEAN centrality differs in different contexts but the core meaning should always lie in its usefulness. Southeast Asia has always been an arena as a place, not an actor which is why ASEAN should be keen to be useful and relevant to major powers. He shares the opinion that ASEAN needs to regain a clinical, cold-blooded and realistic approach to keep its centrality.

According to him, over the past years ASEAN has focused too much on the South China Sea. While the SCS has become a key matter of concern and solidarity for ASEAN, the Mekong topic has received very little attention. He further criticized that discussions about the Mekong region predominantly focus on technical content such as environmental issues, water sources and flows without a strategic holistic ASEAN framework which would be necessary to tackle the multidimensional issues in the Mekong region. Since the 5 sub-regional countries in the respective area all have different interests, it is difficult to reach a common consensus and establish effective mechanisms. While Ambassador Bilahari Kausikan straightforwardly stated that the power of the ASEAN organization is limited due to its members economic status, he also mentions the possibility to maximize its strength: the ASEAN charter and the respective countries’ bilateral relations. Well balanced cooperation relations are mandatory to reduce tensions and conflicts in a region where stability cannot be taken for granted.

Furthermore, Ambassador Bilahari Kausikan stated the complexity of the problems in the Mekong sub-region as it is not only a geopolitical issue but also a matter of nature exploitation, environmental protection, even water security and livelihood guarantee for the future generation. In his opinion the riparian Mekong countries have to proactively demand ASEAN’s involvement and take the lead in implementing solutions and effective mechanisms for intervention and resolution. Since Vietnam has always had a natural strategic way of thinking, the ambassador thinks that Vietnam is fully capable of becoming a pioneer in this matter.

Following his critical and frank speech, Dr. Le Thu Huong from Perth USAsia Center shared her expertise with the audience. She highlighted the importance of energy transition as part of national security in the context of climate change. According to her, safer, greener and cheaper energy solutions are necessary. As she describes the Mekong-issue as a slow burning crisis lacking momentum, she points out the difficulties in putting the Mekong on the pan-ASEAN agenda in 2022. In times in which power asymmetry gaps between China and other countries will grow, she stresses the importance of multilateralism and constructive dialogue with groups informed experts.

The event received participation of a number of Diplomatic Missions in Hanoi, including embassies of ASEAN countries, Germany, Australia, Spain, UK, US and Bulgaria.

In a Q&A sessions, the participants were given the opportunity to ask, discuss and comment on the speaker’s points. Those questions varied from the reluctance if some countries to put the sub-region on the official agenda, over the lack of information among non-involved states to the possibilities of ASEAN to put up guard rights. Additionally, questions about the definition and perception of ASEAN centrality in respect of the U.S. China trade war have been raised. Mr. Nguyen Hun Son, Vice President of DAV commented on the importance of better institutionalization and the need to increase investment in connectivity and sub-regional cooperation. Bringing the event to an end, he thanked everyone for the critical discussion and once again highlighted the importance for ASEAN to regain its sense of realism in order to stay a relevant and useful partner within great power competition.

We are more than grateful to yet another successful event and are looking forward to further interesting discussions as the Mekong Forum series continues to be a flagship joint event between Konrad-Adenauer-Stiftung Vietnam and Institute for Foreign Policy and Strategic Studies (IFPSS), Diplomatic Academy of Vietnam 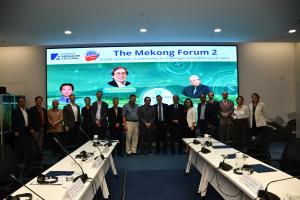 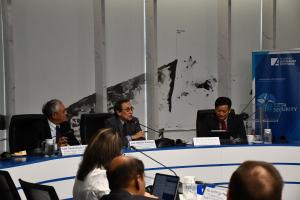 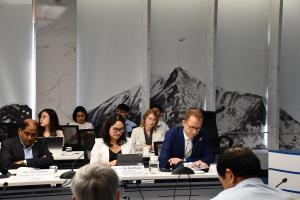 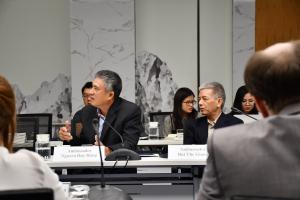 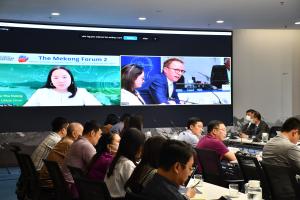