The filibuster strategy "makes the Senate dysfunctional," said Mark Strand, the president of the Congressional Institute, a nonpartisan research group. That, in turn, blocks the Obama administration's agenda, but it also sours public opinion on Washington, with polls showing clear public disdain for Congress in particular. Republicans think voters will reward them for that in November.
March 17, 2010 мэдээлэл захиалга

The filibuster, long seen by its proponents as a necessary check on power and by its critics as a frustrating waste of time, has been around in American politics since the mid-19th century. A filibuster simply allows the minority political party to choose to endlessly debate a bill, stalling — and sometimes preventing — an actual vote. The word comes from the Dutch term vrijbuiter (pirate), in addition to the Spanish word filibustero (freebooting). The origins of filibuster use trace back to ancient Rome, and the practice has been common in several other countries including England and Australia.

In the U.S., the tactic became known as a label for a Senator who held his colleagues hostage by debating legislation endlessly. Originally, both the Senate and the House of Representatives had a rule called the Previous Question Motion, where a simple majority ended debate — a rule the House has kept. But the Senate dropped this provision in 1806, leaving open the potential for a filibuster.

The first filibuster in U.S. Senate history began on March 5, 1841, over the issue of the firing of Senate printers, and lasted six days. Ever since, politicians have loved filibusters or hated them — depending which side of the fight they were on. Proponents argue the filibuster protects the right to free speech and prevents the Senate majority from steamrolling the minority, thus ensuring that critical legislation gets a sufficient airing before being pushed through. Others contend the practice has gotten out of hand, leaving bills gridlocked in an oft-feuding Senate and stalling important votes for purely partisan gain. Peter Fenn, Republican consultant and former Senate aide, called filibusters the "tyranny of the minority."

The only way to stop a filibuster is by invoking cloture — which forces a vote to take place. Cloture, adopted in 1917, used to require two-thirds of the Senate to agree to stop the talking. But with a two-thirds vote difficult to obtain (just four out of 23 cloture movements were successful between 1919 and 1960), the Senate changed the rule in 1975 to require just three-fifths' approval. With senators closely toeing the party line in a way that they rarely had before, senate majority leaders of both parties have in recent decades begun filing for cloture more and more frequently -- largely as a way to gauge whether they have 60 votes for a bill before they expend time and effort on it on the Senate floor.

At about the same time, the Senate created a two-track process that allows senators to block action on a piece of legislation merely by invoking the right to filibuster, without actually having to stand before the chamber and drone endlessly on. Meanwhile, the Senate can take up other business.

The measure, intended to promote efficiency, inadvertently encouraged filibusters by making them painless, and made them a normal tool of political debate. In 1995, almost 44 percent of all major legislation considered by the Senate was delayed by a filibuster or the threat of one.

The filibuster has at times symbolized, justifiably or not, the courageous stand of principled individuals against a corrupt or compromised majority. That symbolism was captured in "Mr. Smith Goes to Washington," the classic Frank Capra film in which James Stewart plays a naïve newcomer who holds the Senate hostage far longer even than Strom Thurmond did, before collapsing in fatigue and triumph.

Since Barack Obama became president nearly 13 months ago, Republicans have made it clear that 60 votes — the number needed to cut off debate in the 100-member Senate — are required to pass, not only major Democratic programs, but also many routine proposals. (Democrats controlled 60 Senate seats from July, 2009 until February, 2010 when Sen. Scott Brown, R-Mass., was sworn in.)

In the current 111th Congress, it appears that a new record will be set. As of the beginning of March, there have been 76 motions filed to end filibusters, resulting in 40 votes on cloture, and 40 instance of cloture being invoked. Projecting these numbers to the end of the 111th session would result in a record number of cloture invocations, and near record levels of motions along with actual votes.

"Republicans have ratcheted use of the filibuster up to completely unheard of levels. Look at the things that the House (of Representatives) has passed that can't make it through the Senate. The list just keeps growing," said Norman Ornstein, an expert on Congress at the American Enterprise Institute, a center-right policy organization.

While Democrats insist that Republicans are being obstructionist, GOP senators have a different view. Senator Orrin Hatch, a Republican from Utah and a 33-year Senate veteran said that: "It strikes me that Democrats are looking for someone to blame for their failed agenda that they can't even get Democrats, let alone the American people, to support (referencing the electoral success of Scott Brown, whose election was widely seen by Republicans as a rejection of President Obama’s healthcare policies by the electorate).”

This March, U.S. Senate Majority Leader Harry Reid called for changes to the filibuster, saying it's been abused by the GOP "just like the spitball was abused in baseball." Senator Reid said the Senate would review filibuster rules in the next Congress and stated that changes were likely.

Senator Reid's embrace of filibuster reform comes after he previously threw cold water on the likelihood of getting the rules changed. His reference to the "next Congress" stands out. To change Senate rules in the middle of the session requires 67 votes, which Democrats clearly don't have. But changing the rules at the beginning of the 112th Congress will require the chair to declare the Senate is in a new session and can legally draft new rules. That ruling would be made by Vice President Joe Biden, who has spoken out against the current abuse of the filibuster. The ruling can be appealed, but that appeal can be defeated with a simple majority vote.

With the loss of Democratic Senator Ted Kennedy’s seat to Republican Scott Brown, coupled with the Republican threat of filibustering any and all Obama supported healthcare legislation, President Obama has decided to try to have the House pass the Senate’s version of the healthcare bill, which the president would sign into law. Additional corrections to the Senate bill would be passed through reconciliation, requiring only 51 votes in the Senate and with debated limited to 20 hours, it would effectively neutralize the filibuster.

Senate Majority Leader Harry Reid confirmed this week that he plans to use the "reconciliation process" to pass the final changes to the Senate's health care reform legislation.

Reconciliation, (also known as the “nuclear option”) is a part of the federal budget process in which debate in the Senate is limited and only a simple majority of 51 votes is needed to pass a bill. Specifically, within the reconciliation process, floor time for debate in the Senate is limited to 20 hours and members can only debate the "conferenced" version — the one both the House and Senate have agreed to.

Senator Reid, like Senate leaders in the past, hopes to use the limited debate and lower threshold of 51 votes for passage to avoid a Republican filibuster. Under normal circumstances, the opposition can stop a bill with a filibuster (a permanent continuation of debate that can only be stopped with a 60-vote supermajority). And though the Senate passed an initial bill with 60 votes last December, Senator Reid needs to pass additions to it to reconcile it with what the House will pass. Only when the bills from each chamber match can President Obama sign health care reform into law.

Republicans are infuriated by the move and claim it's an abuse of what's called "normal order" in moving legislation through. South Carolina Republican Senator Lindsey Graham, for instance, has warned that a health care bill passed through reconciliation "would be the loss of the Senate as a real viable institution."

But Democrats counter that in the past Republicans have regularly used the tactic to pass legislation they prefer. Since 1981 reconciliation has been used 22 times: 8 times by Democrats and 14 by Republicans. Republican uses included the 1996 Welfare Reform bill and a 2007 expansion of student loans. And both parties have used the process to win incremental expansions of social benefits, from enhanced Medicare benefits to COBRA health plans extending health insurance coverage to the unemployed. Republicans respond to this by arguing that none of the past uses were as consequential in terms of impact on the economy and Americans' lives.

Some ponder that if reconciliation is such a powerful tool, why didn't the Democrats use it earlier? Because of another restriction, known as the Byrd rule — named for West Virginia Senator Robert Byrd, who introduced it in 1974. The Byrd rule allows the minority party to block the use of reconciliation if a bill isn't tied strongly enough to the budget process. The full health care bill the Senate passed last December would have violated the rule (and possibly jeopardized support from many centrist Democrats hoping to avoid controversy).

But, because Democrats passed a full health reform bill in December with 60 votes and are only proposing to make changes to that through reconciliation, it's easier for them to argue that those changes are simply about making the bill fit the overall budget.

That doesn't, however, mean the political fight will be any less bitter. Last September, Senate Minority Leader Mitch McConnell of Kentucky vowed that the Democrats could expect a "severe reaction" if they resorted to reconciliation. "Budget reconciliation has never been used to structure one-sixth of the American economy," he said at the time, referring to healthcare reform.

But for Senator Reid to announce the plan to use reconciliation means he's confident that wavering Senate Democrats will support him. And he must not be too fearful of a severe reaction, because he's up for reelection in his home state of Nevada this November. 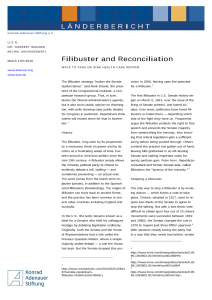