At the start of the Lunar New Year, the Chinese ambassador in Yangon praised Myanmar for having maintained political stability and making progress in the peace process. He said that China had played a constructive role in the process and would remain a presence. The assembled Burmese ministers, regional dignitaries and parliamentarians must have had mixed feelings upon hearing this. For decades, China has been pursuing ambitious goals in Myanmar, not always to the satisfaction of its neighbour. The West’s policy once again risks increasing Myanmar’s dependence on China.
April 20, 2018 Ordering Information 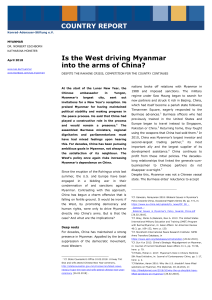 Is the West driving Myanmar into the arms of China? (Pdf)
Download