The Chinese University of Hong Kong (CUHK) and KAS RECAP are organising a series of webinars discussing the legal dimension of the carbon neutrality pledges in Asia. Registration can be done via the link below.
17 marca 2021 15:00 - 16:30 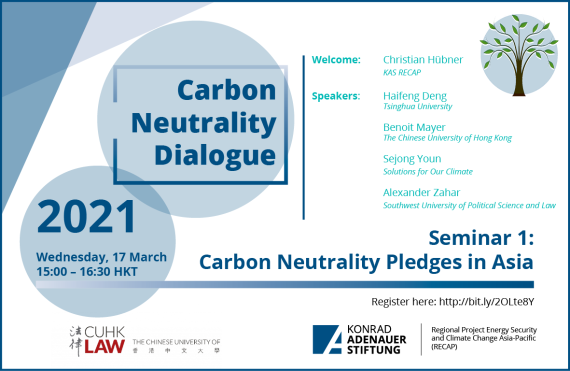 Following the EU, an increasing number of countries in East Asia have announced their commitment to achieving climate neutrality by 2050/2060. Climate neutrality would constitute a major contribution to achieving the objectives of the Paris Agreement. The fundamental shift these pledges represent for the organisation of energy systems, and the economy more generally, generates important questions of international and national law.

Most states have announced their intended action toward climate neutrality as nationally determined contributions (NDCs) and long-term low greenhouse gas emission development strategies under the Paris Agreement. This seminar will discuss the legal force of such announcements. Do states have an obligation to achieve the targets they announce under international or domestic law? What are the consequences, if any, of the failure of a state to take the steps it had announced?