Forgive and Forget? The June 1990 Mineriad

20 years have passed since the violent events of 13th-15th of June 1990 in University Square. The official data speak about six people dead and around 1,000 injured, but the numbers are controversial and there seemed to have been about 100 people killed then. What triggered this outpouring of violence, just a few months after Romanians have set themselves free of communism?

The June Mineriad is intrinsically linked to the “Piata Universitatii” phenomenon. In early 1990, FSN (the National Salvation Front), established with the purpose of acting as a temporary government until free elections were to be held, announced that it would also be running in the elections as a political party. The shift led to the withdrawal of many of the anti-communist intellectuals that originally supported the body, such as Doina Cornea, Ana Blandiana, or Ion Caramitru, to name but a few. But this was only the beginning of a wave of mistrust and disapproval against FSN and its decision to act at the same time as both referee and player of the game. Criticism came also from the fact that many of those involved in the governing body had been members of the Communist party, which made their impartiality questionable.

The need for a new organism involving the legally constituted political parties and replacing FSN became evident. A first series of manifestations against the body began in January 1990. Counterdemonstrations to show support for FSN followed, bringing together workers from Bucharest and miners from the Jiu Valley, among others. The events escalated and the headquarters of the opposition political parties and of newspapers criticising the government were vandalised. On the 13th of February, the National Salvation Front Council was replaced by a Provisional National Unity Council, meant to run the country until the elections, programmed for May. This new governing body was formed half by representatives of FSN and half by members of the other political parties. The month of February would still be the scene of turbulent events, culminating with anti-government protesters entering the Victoria Palace, the Government headquarters. The miners were once again brought to Bucharest, but by the time they arrived, the demonstrators had already been spread by the police and military and their intervention was no longer needed.

April saw the continuation of turmoil. People took the streets and what began as a peaceful demonstration escalated into a true phenomenon. For 52 days, the University Square was home to people shouting “Better dead, than communist” and stating that their aim is to completely eradicate communism from Romania. Some of the demonstrators took extreme measures of protest, resorting to hunger strikes. The claimants of a communism-free zone were not organised in any institutional manner. The protest did begin as a manifestation by one of the historical parties, PNT-CD, but in the end, the protesters were from all walks of life and not politically affiliated.

The attempts to negotiate a solution between the authorities and protesters failed. By June, “patience” towards the protests in Univeristy Square was running extremely thin. On the 12th of June, at the Victoria Palace, seat of the Government, a decision was taken in this respect, with the Police, the Army and The Romanian Intelligence Service being called upon to terminate the manifestations.

A day later, on the 13th of June, the police intervened by raids in the Square, conducting arrests and trying to disperse the crowd. The hostilities increased on the 14th with the coming of the mineworkers to Bucharest. They were met at the Victoria Palace by the recently elected President, Ion Iliescu, who asked them to “occupy and clean the University Square”. Ever since the events, Iliescu has denied being the one who called the mineworkers to Bucharest, but in a recent interview in June 2010 he admitted that their coming to the capital was organised by FSN.

The manifestations in the Square were violently put to an end. Protesters and pedestrians alike suffered severe battering, some were killed and many have been abusively detained on arbitrary basis, only to be released days or months later, with no explanation offered as to what had happened. The President publicly thanked the miners for their intervention. The violence of the events then led to an increasing wave of mistrust in the country’s hopes of fostering democracy and it drove many on the path of emigration. It is believed that up to a few hundred thousand Romanians left the country then.

The months following the December ’89 Revolution were troubled times. The newly found liberty seemed to have taken people almost by surprise. Romania had to face almost forgotten traits of democracy – among them, the existence of a multi-party system, which implied the existence of opposition. Instead of being a partner of dialogue and a much needed instrument towards building a healthy democracy, any opposition became a threat, a “who is not with us is against us”. This brought about a surprising return to the proletarian discourse of the 1950s-1960s. The demonization of capitalism, of the historical political parties and of the intellectual elites did little to help the proper rebuilding of a democratic political system.

The June 1990 Mineriad was a clash of social classes. The slogans of the miners vividly captured the spirit of the events - “Death to intellectuals” or “We work, we don't think!” . The rupture was unsurpassable and violence killed any hopes of dialogue. In all honesty, it was not the miners’ role in the first place to seek out a dialogue with the protesters; that was for the government to do. In fact, there is no legitimacy to be found in the mineworkers’ intervention in the events. An explanation was offered, however - they were there to restore order and calm. The appeal to calm was a leitmotiv of those days.

Restoring order means going back to a state of things that people are accustomed to, and therefore feel more comfortable with, be that good or bad. Psychologically speaking, it seems it is easier to understand and accept the status quo, rather than change, regardless of the axiological value that change might bring along. Most people have a natural tendency of rejecting information that contravenes to their already established system of thinking. Was that the case for the newly-born Romanian democracy? Was it too much to take in, with all that it brought with, the freedoms, the idea of plurality, the unavoidable presence of an opposition?

The miners were the perfect pawns in 1990. It may very well be they were truly convinced of the earnestness of their mission, being called upon to save Romania’s new democracy from the threat of the hooligan-intellectuals, as the press of the time narrated the events. The media had a very unilateral approach of the topic, depicting the episodes as a justified measure and maintaining the official position of FSN that the protesters were hooligans trying to undermine the democratic efforts. The extent to which the violence of the miners went is unpardonable and they are undoubtedly the authors of the aggressions, but are they the only villains of the story? Do they carry the whole responsibility for the tragic course of the events?

After their incursions to Bucharest in 1990, the miners acquired a taste for taking matters into their own hands, and became players, instead of instruments of the game. Confident in their power as a mass, they continued to come or to threaten to come to Bucharest for their claims. Only that on these new occasions their actions were directed against, and not in the support of the government. Nowadays, the miners are severely affected by unemployment and poverty and many of them still suffer the stigma of the Mineriads. Most of the mines in the Jiu Valley have been closed down and the region is now among the poorest in the country.

Years later, there are many questions left unanswered in what concerns the mineriads. The leader of the miners at the time of the events, Miron Cozma, has served 10 years in prison. Ion Iliescu, the then president of FSN, has faced accusations in the case of the 1990 events, but the Directorate for Investigating Organized Crime and Terrorism decided not to start legal proceedings against him.

“Vingt ans après”, Romania still does not know what really happened in those terrible June days. The only people still trying to find the truth and see justice done are either the victims of the violence or their families. Romania has forgotten what it went through 20 years ago. It might seem cynical, but to many of the children born in democracy, the Mineriads are either something they have never heard about, or “the fight of the miners for a better life”. Recent history is covered in a form of amnesia. This indifference towards the past is now institutionalised. The lustration law, which would have vetted former communist officials from holding public office, has recently been struck down by the Romanian Constitutional Court. The decision was of little interest to the general public and raised a debate that can be described as lukewarm, at the most.

Little has been done in shedding more light on the Mineriads. Every June, there is a recurring interest on the matter, articles are written, debates are held, and then “calm” is again restored. Who has not truly come to terms yet with June 1990 are the victims and their families. They have not forgotten, and most certainly have not forgiven. 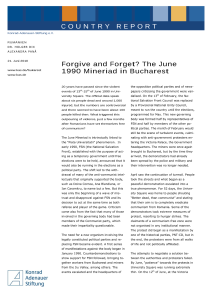