This edited volume is the outcome of a workshop that was jointly organized by the Hiroshima Peace Institute and the Konrad-Adenauer-Stiftung in December 2010. The immediate motivation for the workshop was the general feeling among us that whereas there was a tremendous amount of regional activities tending in the direction of East Asian regionalism, there was an equal amount of dissonance that could be observed. In other words, although participating countries in the regionalist process were generally enthusiastic about achieving a measure of regional coordination, their efforts were not always congruent or convergent. In fact there seemed to be many instances where the policy initiatives of one country appeared to be at odds with that of another. In light of this situation we decided to host a workshop in Hiroshima and gather feedback from prominent scholars in the field about the preferred directions of individual countries.

The meeting brought together scholars from ASEAN, China, Japan and South Korea. During the workshop the paper writers benefitted from the presence of a number of invited discussants. They included Dr. Axel Berkofsky from Pavia University in Italy, Prof. Kim Gi Jung from Yonsei University and Dr. Tatsuya Nishida from Hiroshima City University. Their robust engagement of the speakers allowed the paper writers to rework their papers and make them stronger.

This edited volume that arose from the workshop brings together revised versions of the papers that were presented at the workshop as well as a solicited piece from Dr. John Ciorciari from the University of Michigan. Participants at the workshop felt that since the United States has an overwhelming influence in regional affairs, its position should also be included. As a result, the book contains an introductory theoretical chapter that examines the various schools of thought in international relations and their respective positions on regionalism. Subsequently, the positions of five major players in the process are examined. Then the conclusion addresses areas of convergence and diversion among the country positions.

In bringing this book to fruition we are thankful to our corporate sponsors – the Hiroshima Peace Institute and the Konrad-Adenauer-Stiftung for making both the workshop and project possible. Ms. Miki Nomura at the HPI provided the necessary administrative support as did Ms. Hyekyung Lee from the KAS office in Seoul. Jörg Wolff from the newly opened KAS office in Tokyo kindly agreed to defray the cost of publishing this edited volume. 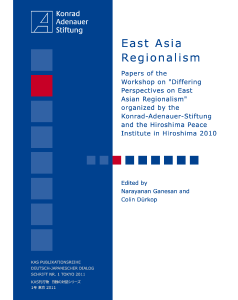