của Vu Thi Thu Phuong
Rules-based [international] order is defined as the notion that all are bound by a global set of rules, an international law above power. After the Second World War the United States sought to create a more rules-based international order and drove the creation of new institutions, chiefly the United Nations, the World Bank and the International Monetary Fund, the World Trade Organization. Order is necessary to reduce chaos. But whether the international order is just, fair, depends on the type of international order it is. Many “realists” argue that the rules-based order is a fiction and that international relations are still determined by power. Truth is somewhere in the middle. International relations are not defined exclusively by either power or rules, and the distinction between the two is not always clear cut The idea of a “Rules-Based Global Order”, and the need for it, has risen to prominence in recent years. Various ideas of a “rules-based global order” have been promoted by various countries and organizations. However, the concept of a “rules-based global order” is still ambiguous. At the regional level, a big concern today is that multiple “orders” start to emerge. However, it is necessary to explore a possible existence of consensus on a rules-based regional order. ASEAN countries are among top affected when set rules lose cohesion and abidance. ASEAN is severely tested, adrift and divided. It is imperative for ASEAN to finds constructive solutions to maintain its relevance and centrality in regional processes. A big question for ASEAN now is to explore the possible existence of consensus on RBO, what rules are to be followed, what visions actors have about the institutions that must be used to establish the rules, what their mechanisms would be, and how decisions are reached within them? Today’s topic is very on time and useful for ASEAN and Vietnam itself, especially in its years as chairmanship of ASEAN. Policy recommendation is expected as follow-up of this workshop. KAS and DAV hope this conference provided a good platform for exchanging ideas among scholars in ASEAN and ASEAN’s partners on the reshaping of a new regional rules-based order and ASEAN’s role in the process.
Ngày 23 tháng 9 năm 2020 thông tin đặt hàng 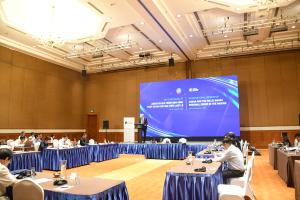