it is a great honor for me to talk in front of this distinguished group of editors from all over Asia and Europe.

We all know that there is an invisible yet tangible barrier between journalists and diplomats. When you want information from us we sometimes cannot deliver it, when you are asking for a direct quote we only give you

background information. Still, I think that we have something in common, because I would call journalism and diplomacy the second oldest businesses in the world.

This forum is dealing with the media crisis. In my opinion the media are not in a crisis, they are still vibrant, vital and will remain crucial in the 21st century. It is, however, a difficult transformation you are going through and at the end something new and different will emerge.

Journalism is and always was a business with important political dimensions. Quoting Lord Macaulay: „If you want to read a people‘s history you must read its newspapers.“ Thus this is a timely and important conference. We will have to ask tough questions: Will there be newspapers in the future to

read our society's history? What is the future of traditional media? What are the media of the future?

I am personally deeply convinced: When we talk about the future of the media three basic principles should remain intact throughout any transformation process:

If we talk about transformation and quality of the media, we are talking about people and money. For example, during my time in Afghanistan I observed a change in journalism. The number of qualified foreign correspondents in

Kabul was cut down due to financial reasons. In my opinion this was and is a mistake.

At the same time, a new profile of reporters evolved out of this change: Young journalists, who are home-based but travel a lot, built up local networks in Afghanistan to gather and receive information. Such a system will work as long as the ethical guidance remains intact, because buying information from dubious sources should be avoided under any circumstances. More than ever, freedom of the media means inner independence and moral strength of the single journalist vis-à-vis one‘s headquarters, outside pressure or the temptation of a hot story that cannot be

The intellectual background of journalists also changed in recent years. Whereas the older generation learned to be a journalist from scratch I observe that the younger generation consists of academic experts. There are no longer the old battle horses who learned their craft in the rice fields of Vietnam, in the jungles of Africa or in the defence lines around Sarajevo. But I am sure that also the young experts from academia will move forward to reality during their successful careers.

Last but not least let me say a few words on the quality of the audience. The traditional reading culture of the 20th century gets lost. It seems that nowadays many people gather information only through watching TV or surfing in the internet. Traditional newspapers are less and less read. Thus, efforts have to be made by our societies to strengthen the quality of the audiences. Here journalists and diplomats are finally in the same boat: We have to bring back to our governments and publics the message that any effort to encourage reading about domestic issues and foreign policy is an investment in freedom and democracy. 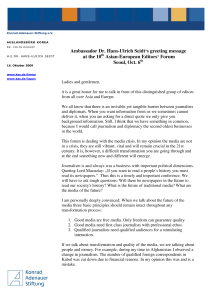