The Multilateral Trading System in Crisis: EU-Canada Leadership and Collaboration

The multilateral trading system is in crisis. Beginning under President
Donald Trump, the United States abdicated its traditional
leadership role in the trade regime, abandoning multilateralism in
favour of aggressive unilateralism and launching an unprecedented
assault on the World Trade Organization (WTO). Despite President
Biden’s professed commitment to international cooperation, there
has been little change in US trade policy under his administration.
Meanwhile, China has also shown a flagrant disregard for the rule
of law in trade, weaponizing trade as an instrument of economic
coercion against weaker states, in blatant violation of the rules and
principles of the WTO. In short, two of the world’s dominant economic
powers have been increasingly behaving as rogue states in the
multilateral trading system. 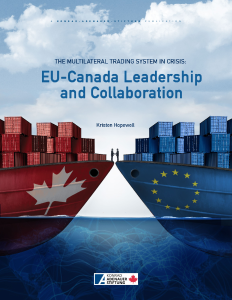