Responsibility to Protect – A New Challenge for the International Community? 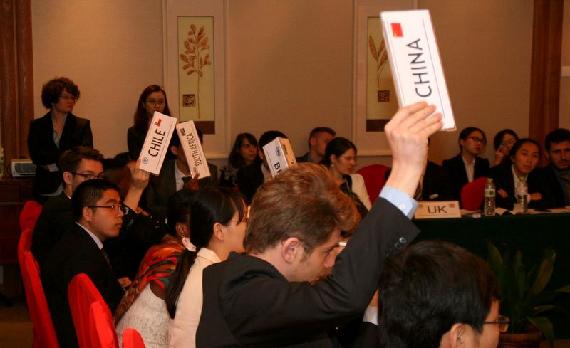 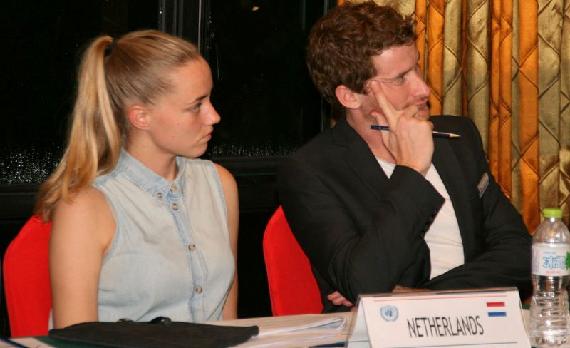 KAS Shanghai
The delegates from the Netherlands listen carefully during the moderate caucus. 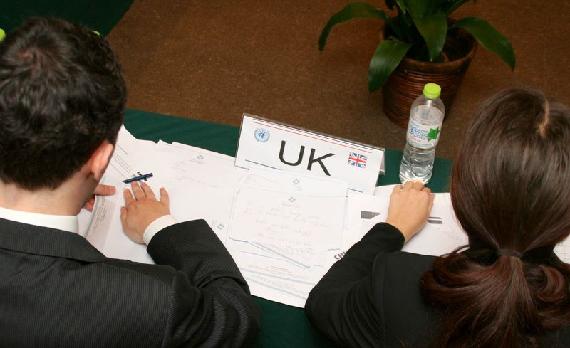 KAS Shanghai
The delegation from the UK going over their notes. 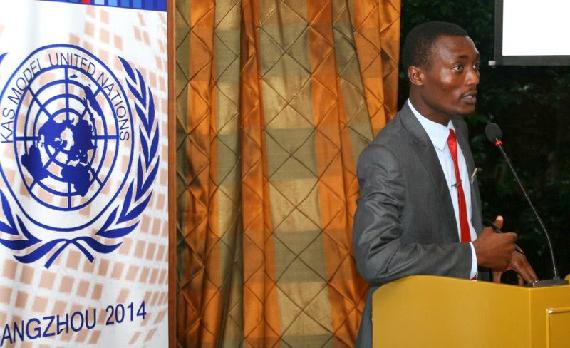 KAS Shanghai
The delegate from Nigeria addresses the Security Council during the moderate caucus.

The United Nations Security Council (UNSC) is one of the six main bodies of the United Nations and is charged with the maintenance of international peace and security. Its powers include the establishment of peacekeeping operations, the establishment of international sanctions, and the authorization of military action through Security Council resolutions.

The “Responsibility to Protect” (R2P or RtoP) is an emerging norm that sovereignty is not a right, but that states must protect their populations from mass atrocity crimes – namely genocide, crimes against humanity, war crimes and ethnic cleansing. To provide the participants with realistic circumstances and to discuss and try to apply the principle of responsibility to protect this KAS Model United Nations presumed the following situation: In the Central African Republic (CAR) ethnic and religious tensions had led to a high risk of genocide. Following the principle of ‘responsibility to protect’, France had introduced a draft resolution to allow a ‘coalition of the willing’ to engage all necessary non-violent and violent measures to restore peace and prevent further atrocities against the civil population in Central African Republic.

A special keynote was held by Dr. Wolfgang Röhr, Consul General of the Federal Republic of Germany in Shanghai, who gave a very inspiring speech filled with advice for young diplomats.

The 15 country delegations had to analyze the origins and key dimensions of the crisis and to discuss further actions to be taken by the international community. The ultimate goal of the conference was to pass a resolution in order to implement the principle of R2P in the case of the CAR. In order to prepare the conference, the delegations did some research on the topic in advance and had to hand in Position Papers. These Position Papers include each country’s position on the topic as well as proposals for actions and solutions.

On Saturday, the delegates had the floor to discuss all kind of issues related to R2P, sovereignty and crisis management. During moderated caucuses, the delegates clearly stated their positions and represented the interest of their countries. Meanwhile, the delegates had continued to negotiate and to carry out cooperation building efforts actively. They showed much passion, bargained in small groups and wrote down proposals in Working Papers. Heated discussions went on. The participants were split up into two groups which were led by China on one side and the UK and the USA on the other. They realized that it would be difficult to pass a draft resolution at the end of the day. The situation got further complicated by a new emergency scenario in Rwanda which appeared to be overrun by rebels from the CAR. The two groups of delegates gathered in an unofficial meeting first in the conference room and later in the lobby of their hotel to improve their draft resolutions.

On Sunday, the two draft Resolutions on CAR and Rwanda were introduced. After adding several amendments, both draft resolutions were successfully passed.

During the Closing Ceremony Dr. Peter Hefele awarded outstanding delegates for their great performance. The best position paper was written by the delegates of Kenya. Delegates of China, South Africa and the Netherlands were awarded for their excellent individual performances. Many delegates expressed their wish to participate again in KAS MUN conferences in the future.