Conflicts and disasters have become endemic in most parts of Africa, and Ghana is no exception. Though it is acknowledged that Ghana is an island of peace in a turbulent sea, it has got its own fair share of conflicts in various part of the country during the past decades.Most conflicts which have engulfed nations and wrecked untold hardships on the citizens and destroyed state infrastructure, have often begun as minor family, clan, tribal, religious, traditional or chieftaincy feuds.Even though such occurrences cannot totally be ruled out, it is believed that even before these feuds degenerate into large-scale conflicts and constitute threats to national peace, the existence of a workable Policy on Early Warning System on Internal Conflicts and Disasters, with in-built Response Mechanisms, could go a long way to quell them, even before they spread. After all, prevention, it has proven, is less expensive than cure.It is in this light that the Konrad Adenaur Foundation [KAF], a German Non-Governmental Organisation which is committed to governance issues, in conjunction with Ministry of the Interior, which has over-all responsibility for internal security, thought it expedient to organise a Stakeholders’ Workshop on Internal Conflicts and Disasters with the aim of bringing all shade of opinions to bear on the formulation of effective Early Warning System Policy Document for the country. The Programme which is in line with the Ministry’s strategic plan, was also to offer all the Stakeholders and the Experts in the field of Conflict Management, the opportunity to thoroughly deliberate on the Matrices which had been developed by the Muiti-Sectoral Committee responsible for the formulation of the Policy Document.
27. Oktober 2005 Bestellinformationen

The objectives of the workshop were the following:-

The conclusions of the report: 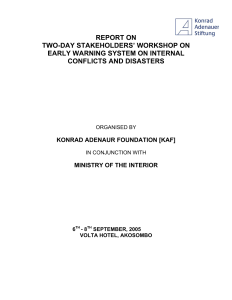