Dynamics of the U.S.-China-Korea Triangle in Times of Decoupling

Konrad-Adenauer-Stiftung Korea Office has released a short article tackling a question of how South Korea should react amidst the U.S.-China systemic competition and decoupling.
27. Mai 2021 Bestellinformationen

Currently, the U.S.-China relations are on the borderline between “cold peace” and “new cold war.” Among the four key areas of geopolitics, geo-economics, technology, and ideology, Korea’s mainstream attention is mainly focused on the areas of geo-economics and technology from a pragmatic standpoint. If geopolitics, which mainly reflects military and security thinking, overwhelms the logic of the economy and market, international relations only degenerate into a venue for power struggle and zero-sum game. The decoupling between the U.S. and China would cause huge economic losses not only to the U.S. but also to countries around the world. Thus, amid the advent of the New Cold War, we must deliberate on “geopolitics beyond geopolitics.”

After the 25th anniversary of Korea-ChDue to the geopolitical situation surrounded by great powers such as the U.S., China, Japan, and Russia, Korea should always accurately understand the movements of the outside world to ensure its survival and safety. ina diplomatic relations, Korea-China relations have gradually turned into a relationship of competition and confrontation from cooperative partnership. The structural reason for that is that the need for mutual cooperation and the areas of common interest between Korea and China are gradually decreasing.

The People’s Republic of China is not a Marxist- Leninist state as the West thinks. It is reasonable to regard China as a capitalism with an authoritarian system ruled by the Communist Party. As the Biden administration’s value diplomacy takes on the nature of systemic competition, there is less room for strategic ambiguity in Korean diplomacy. Under these circumstances, South Korea should clarify its national identity in respect of democracy, human rights, market economy, free trade and multilateralism. However, it is not wise for South Korea to push for identity-based diplomacy with China, explicitly citing values and alliances.

About the author:
Dr. CHANG Young Hee is currently a research professor of Sungkyun Institute of China Studies at Sungkyunkwan University. He is serving as managing editor of Sungkyun China Brief, which is a quarterly magazine covering Chinese issues in the field of social sciences. His research interests include Chinese politics and diplomacy, Taiwan’s politics and cross-Strait relations, East Asian international relations and public diplomacy. He received a Ph.D. degree in political science from the National Taiwan University. 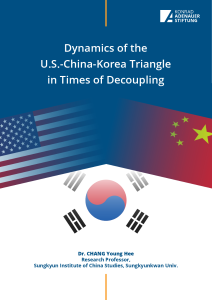 KAS Dynamics of the U.S.-China-Korea Triangle in Times of Decoupling
Herunterladen
Ansprechpartner 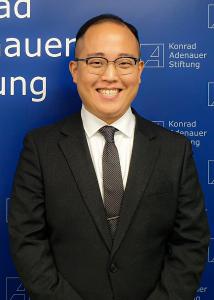 China in Africa: Wielding Influence in the Age of Coronavirus