Praise for the premiere came from a qualified source. “That was an amazing experience,” commented Dr. Klaus Schüler on the first E-lection Bridge Africa conference from April 29th to May 2nd in Accra. The CDU General Manager, who is considered one of the world’s leading experts on political communication, travelled to Ghana as one of the speakers at the summit of African and German campaign experts. “I am extremely impressed with this meeting,” he pronounced about the initiative from KAS Media Africa.
6. Mai 2011 Bestellinformationen 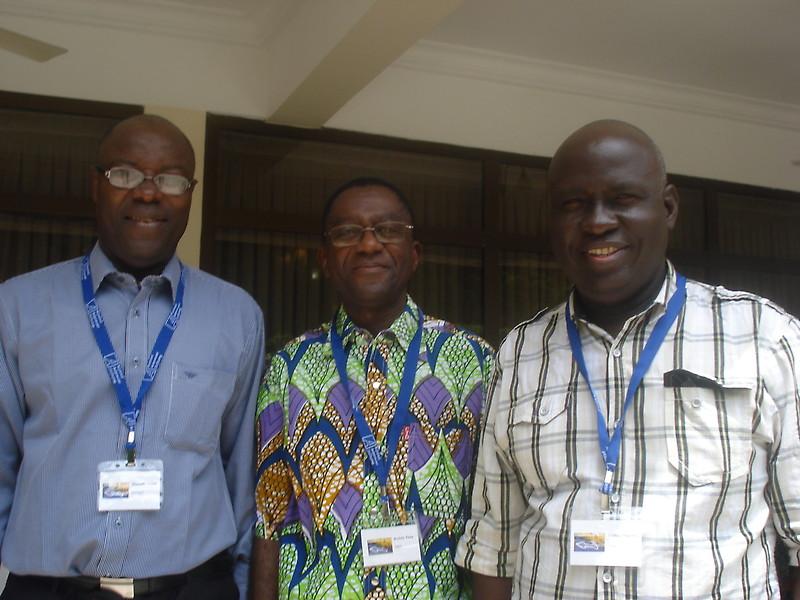 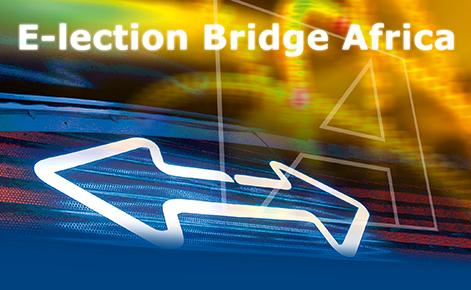 switsch / Medienprogramm Sub-Sahara
E-lection Bridge on tour: We kicked off the meeting with a visit of the NPP's primaries. The New Patriotic Party is currently in opposition in Ghana. The next national election is schedulded for 2012.

switsch / Medienprogramm Sub-Sahara
On site at a voting station in Greater Accra: The regional experts were particulary interested in issues like participation, organisation, and communication.

switsch / Medienprogramm Sub-Sahara
E-lection Bridge Africa was met with a lot of interest by the media in Ghana. This picture shows Lutero Simango from Mosambik giving a television interview.

switsch / Medienprogramm Sub-Sahara
Dr. Klaus Schüler (General Manager, CDU) is considered on one the leading experts on political communication in the world. He gave talks on "Internatinal Trends in Campaigning" and "Party Organisation".

switsch / Medienprogramm Sub-Sahara
John Mrema from Tanzania and Michelle Fondo (Kenya) listening to the fascinating presentations by our speakers.

Dr. Schüler went on: “The exchange of experiences with the African colleagues took place at a very high level. The idea of the two-way street works brilliantly.” The Deputy German Ambassador, Hans-Christian Winkler, spoke to the participants of a “successful idea.” The conference event took place in close cooperation with KAS Ghana and the KAS Resident Representative, Dr. Gregor Ryssel.

The foundation’s regional Media Programme Sub-Sahara Africa has been working increasingly in the field of political communication since the beginning of the year. During the projects in the first quarter of 2011 – in Ghana, Zimbabwe, Tanzania, Namibia, among others – the realization grew that the African players in the region are all facing similar challenges. This is especially true regarding the use of new digital communication (Facebook, Twitter, YouTube, etc.). In order to respond to this need optimally, KAS Media Africa developed the concept of the E-lection Bridge Africa. In addition, experts from Germany who work in this field were incorporated. The exchange began in February 2011 with the web platform, www.kas.de/e-lectionbridge, where African and German experts can share their experiences and assessments in interview form. The feedback on this transcontinental bridge was encouraging.

Following the above-mentioned bilateral projects and the successfully launched website, the next step was the design of a regional conference. Within the framework of the cooperative network of KAS country programs, suitable players in political communication were identified and invited to Accra for the first E-lection Bridge Africa.

The main goal of the event reflects the regional approach of the Media Programme: the target group from Africa (and Germany) should:

… be comprehensively informed about current trends in the subject area

… be inspired by the experiences of their regional neighbours

… broaden their knowledge of theory and practice

… ultimately discuss and apply their newly gained ideas, insights and approaches in their own country – within the local framework, of course

The E-lection Bridge Africa lives from its diversity. Against this background, the participants of the first edition came from eleven countries in Sub Sahara Africa: Angola, Congo, Ghana, Kenya, Mozambique, Namibia, Senegal, Republic of South Africa, Tanzania, Uganda and Zimbabwe. “A kind of African Community of the digital election campaign,” according to Markus Brauckmann, Head of KAS Media Africa. In addition, two notable speakers came from Germany.

Right from the start, the carefully selected venue of Accra offered the ideal chance to connect practice and theory. On the first day, the New Patriotic Party (a partner of KAS Ghana), organized their primaries in the whole country to determine their district candidates for the national elections in November 2012 – a welcome opportunity for the regional visitors to get firsthand, on-site information. The observers were primarily interested in the incorporation of the media, member participation as well as party organization. “What the colleagues organized here is impressive,” assessed Michelle Fondo from Kenya after visiting three election offices in the Greater Accra Region. In return, the interest in Ghana for the premiere of the E-lection Bridge Africa was immense. Several newspapers, TV stations and radio reporters requested interviews with the participants, including live performances on political talk shows. After returning from the primaries, the first program sessions began in the afternoon.

The logo of the E-lection Bridge Africa symbolizes the idea of a two-way street. During the conference, knowledge, insights and reflections flowed in both directions – from one country to another, from continent to continent. To put it differently: the construction of the bridge proved to be stable. First, the African experts informed their regional colleagues and the German speakers about the political situation, their party and political communication in their country. The unusually high number of questions and comments confirmed the relevance of the regional approach. As the central challenge in their work, the participants consistently mentioned absent or difficult access to media, the often dominant role of the ruling party, an inadequate legal framework, insufficient financial means, and the unsatisfactory organizational structure of their own party. Therefore, they are convinced that the Web 2.0 instruments as well as the prevalence of the cell phone are very important for political communication in the region – especially against the background of a strongly growing group of young voters.

Already ahead of time, KAS Media Africa had finely coordinated the content with the German speakers in order to meet the specific needs of the participants. For instance, Dr. Klaus Schüler gave a detailed overview of the international trends in political communication, with a specific focus on the “Election 2.0.” Overall, the current situation demands new and better means of participation for the members and supporters, remarked the CDU General Manager. One must carefully consider how and to which degree this will be realized. In his second speech, he addressed the party organization in a campaign. The award-winning strategist chose the CDU in the 2009 parliamentary election as a case study. Step by step he familiarized the African participants with the topic. The presentation served as the catalyst for a lively debate.

Oliver Röseler, Department Head of Marketing and Internal Communication at the CDU, supplemented the performance with two excellent presentations – which were also oriented toward the requirements of the African participants. Everywhere in the region, as KAS Media Africa had realized, the political partner parties have problems reclaiming their national history / story. The reason: often the powerful ruling party had monopolized the story to their own benefit. The question remained, what was left for the (smaller) opposition parties? To answer this question, Oliver Röseler presented the CDU campaign, “Our Country,” where citizens formulate their present and future image of Germany. With such an offline/online campaign,” said the long-time political expert, one could “win the Today and Tomorrow for oneself, if Yesterday is already in the hands of the rulers.” On that note, he took a particular look at the role of volunteer campaigns with the concrete example of Angela Merkel’s TeAM Germany in the 2009 election. This session was extended due to the many engaged contributions to the discussion, as well as to do justice to the objective of the E-lection Bridge Africa. Several participants commented positively: the presentation served as a road map for the often urgently needed implementation on the ground.

Jake Obetsebi Lamptey from Ghana and Libolly Haufiku from Namibia rounded off the array of relevant case studies. While the local NPP Chairman introduced the opposition party’s strategy for the national elections next year, Haufiku used the example of the Rally for Democracy and Progress (RDP) to explain how small opposition parties can position themselves and compete against established ruling parties. The appropriate working title of his presentation: “Battling Giants.”

In Africa, a special role is played in political communication by the cell phone, whose users are increasing rapidly. This is a reality not lost on KAS and since the beginning of the year, KAS Media Africa has been in close talks with the Praekelt Foundation in Johannesburg to develop a mobile tool kit for democratization suitable for political parties. The working title of the project: M-Dem (Mobile Democracy). The founder, Gustav Praekelt, came to Accra to personally introduce the ambitious plan – and in return to take home new input from the target group. The pleasant feedback: the participants confirmed that they are in need of just such an instrument. With case studies from their countries and additional questions, they gave Mr. Praekelt and KAS Media Africa fresh input which will be incorporated into further development.

In follow-up talks it became clear that the establishment of the E-lection Bridge Africa was a great success. The regional approach was convincing: according to the participants they finally had the possibility to learn more about the methods and players in neighbouring countries. The personal exchange was extremely meaningful. They return home with a new understanding, fresh ideas and energy to implement a few projects in the short- or medium-term. One concrete example: On May 5th the Tanzanian KAS partner party starts its TV channel called “Chadema TV”.

The participants expressed a strong wish for a sequel next year, for a platform of continuous exchange in the meantime as well as follow-up projects in the field of political communication in their countries. Markus Brauckmann, Head of KAS Media Africa, referred in this regard to the interconnectedness of the country programs, a real benefit of the Konrad Adenauer Foundation. In addition, he promised that the event would become a permanent arrangement: “We’ll see each other in 2012 in Tanzania at the second E-lection Bridge Africa.” The topic of political communication in Sub Sahara Africa continues to be a key component in the work of the Media Programme. The regional network-building will continue to feature high on the agenda of KAS Media Africa. 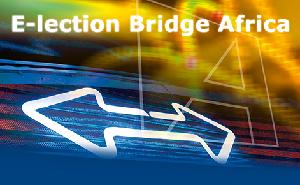 switsch / Medienprogramm Sub-Sahara
The second edition of KAS E-lection Bridge will be hosted in Tanzania in 2012.