Germany’s Minister for Economic Cooperation and Development Gerd Müller asserted that re:publica Accra brought together members of digital society in West Africa and his country to discuss and network. This, he added, offered an opportunity for Africans in the digital space and their German counterparts to learn from each other.

Taking place just months after German Chancellor Angela Merkel’s visit to Ghana, a country steeped in the digital age, the programme’s speaker line-up included academics, artists, bloggers, designers, journalists and others. Among these were AfricaBlogging’s Anne-Marie Befoune, a Cameroonian based in Dakar, Senegal, and Malawi’s Jimmy Kainja who both discussed boundaries and technology.

At the crux of their panel discussion was how Africa was overcoming its linguistic troubles dating from colonial times. Cameroon, a bilingual central western African nation, epitomises this state of affairs in a unique way. Cameroon’s linguistic crisis, threatening to tear the country apart, has its roots in the pre-independence era, explained Befoune, a youngster who took to blogging in 2015 because “it gave me a voice”. The blogger opined sharply: "French is a dead language." This view sparked much debate from the audience towards the end of the conference.

Further, Kainja, a lecturer, researcher and AfricaBlogging editor, conceded that media coverage in many African countries was still based along linguistic lines as media houses gave more attention to neighbours who share their colonial language. Nigeria and Ghana, both English-speaking nations surrounded by Francophone countries, exemplify this. Kainja noted how the use of both English and French on the network’s website, with some articles translated to either language, was helping bridge the divide. 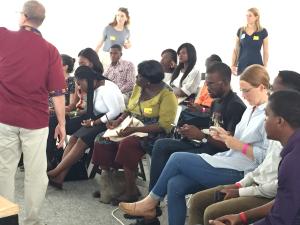