The wild, wild web - the battle for the internet! Who makes the rules? - Medienprogramm Subsahara-Afrika

The wild, wild web - the battle for the internet! Who makes the rules?

In its various manifestations, it is, or at least it is shaping up to be, the media question of the year: Who makes the rules on the internet? Should there be rules on the Internet? Should there be a system of checks and balances? If so, how is this then enforced? KAS Media Africa tackled this timely and contentious issue in close cooperation with our partners from the leading South African weekly, the Mail & Guardian, at an international forum in Johannesburg, 25 January 2011.
28. Januar 2011 Bestellinformationen

The convener of the high profile panel, William Bird, set the tone for the evening, by opening proceedings with the statement: “Who is then the sheriff of the wild, wild web”? The lively debate that followed threw up a range of new questions, thanks also in a large part to an extremely engaging audience, which included Derrick Watts, the leading investigative TV journalist of the region; Harold Maloka, Chief Director of Media Liason in South African president Jacob Zuma’s office, Izak Minaar, Editor-in-Chief SABC Digital News and Swedish ambassador to South Africa Peter Tejler.

The Internet has become a key element of modern life. In Africa Internet connections in general but mobile Internet in particular, are increasing at breathtaking rates. Early last year it was reported that the African mobile phone market – at more than 400 million subscribers – is now larger than in North America. Some countries, such as South Africa, have 'mobile penetration levels' - the number of handsets compared with size of population – close to those of Western Europe. (Guardian newspaper)

In his introductory remarks, the outgoing director of the KAS Media Africa Programme, Frank Windeck, referred to the positive impact of the net in different parts of Africa. But he warned of what he termed the “ugly side of the internet” citing as one example, the violence and hate speech spread via the net following the pre and post election period in Kenya in 2008.

Chris Roper, editor in chief of the Mail and Guardian’s online division,

sketched a wide picture ranging from Internet regulation in China, to social networks and inevitably the Wikileaks affair. Roper stressed that as democrats, we should be vigilant, because developments, technological and otherwise, have the potentially for far-reaching, and possible disastrous results.

The next panellist, Jonathan Shapiro delivered a practical example of Roper’s observation, by way of a power point presentation. Shapiro, famous for his pen name Zapiro, is not only South Africa’s leading cartoonist, but also a fierce advocate of freedom of the press. He passionately shared how radical right-wing and racist groups were “stealing” his work, especially those sketches critical of the South African government, and integrating it on their web sites. This he said created the frustrating implication that he Zapiro supports their cause. The question from Zapiro, Who protects us from such developments?

Can the wild, wild web can be tamed – at least partly? Pria Chetty, principal attorney of Chetty Law, "Foresight is failing lawyers miserably. We're rules based and text based; the internet leaves us bewildered." She maintained however that that there is a place for regulation, even if it is just playing catchup.

Roper followed up by adding that when considering regulation, one has to be conscious of how the internet spans local and global bounds. "In our society we can put up a Prophet Muhammad cartoon and it's protected. But in Saudi Arabia, where that same internet is, it's not. You can never legislate on that global level, you can only legislate on a local level. That's one of the major disruptive attributes of the internet," he said.

Markus Brauckmann, head of the regional media programme of Konrad Adenauer Stiftung, pointed out that in the internet environment, there is a conflict between global and national interests. "We have political players who make resolutions but we also have private sector players. Google and Facebook are not accountable to any body of law or any elected parliament," he said. Brauckmann, who spearheaded the CDU-Internet television campaign, also introduced the concept "Consumer Citizen" and emphasised that we should not underestimate the possibility of democratic participation when faced with questions around facebook, flickr, google etc.

It was then left to the “Sheriff”, William Bird to summarise: “We have thrown up even more questions,” and that he said is good thing, because we need the debate to continue and with a cross section of voices giving input. The challenge now is to sustain the debate, to ensure apathy does not set in. This reality is not lost on Brauckmann who stated that KAS Media Africa will continue to facilitate and be central to such discussions in the future.

So a battle is underway, a battle between a freewheeling, decentralized Internet culture and the forces of an offline world built on centralization and control —between those, as Internet researcher Tim Hwang puts it “who want to remake the world in the Internet’s image and those who want the Internet reshaped in the world’s image.” How these battles play out and who emerges victorious will shape and affect virtually everything and everyone.

Clearly, it is all of our business. 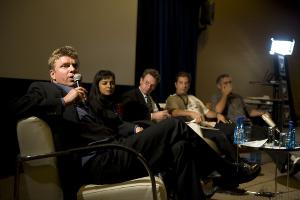 The panel engaged in a lively discussion - so lively that it went into overtime...