A delegation of the Axel Springer Academy visits KAS Ramallah

On May 3, 2012 the office of the Konrad-Adenauer-Stiftung (KAS) in Ramallah hosted a delegation of twenty-nine young professionals from the Axel Springer Academy.
7. Mai 2012 Bestellinformationen 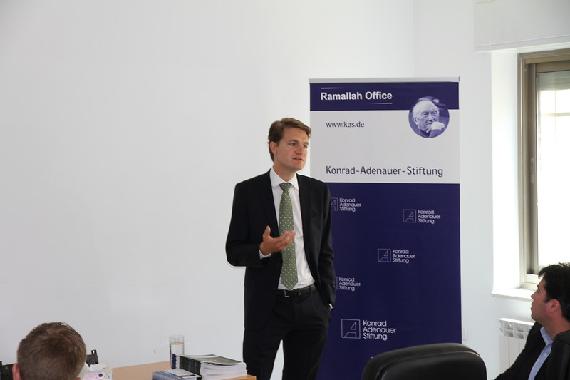 During the visit, the delegation attended briefings of German and Palestinian representatives who provided a comprehensive overview about the situation in the Palestinian Territories. The participants discussed the regional developments with the Head of the KAS Ramallah and the Deputy Head of the German Representative Office in Ramallah, deliberated on the public opinion results with the leading Palestinian pollster and learnt about the stance of the Israeli-Palestinian negotiations during a briefing with the chief negotiator of the Palestine Liberation Organization (PLO). The success of the visit was demonstrated by an amount of constructive questions of the delegation’s representatives at the end of each session, lively debates and stormy applauses crowning the speakers’ contributions.

At the KAS office in Ramallah, Mr. Felix Dane, the Head of the Konrad-Adenauer-Stiftung in Ramallah, welcomed the delegation and introduced the programme. He handed over the word to the Deputy Head of the German Representative Office in Ramallah, Mr. Christian Jetzlsperger, who introduced the mission of the office and provided the participants with a comprehensive snapshot of political, economic and social situation. He depicted the fragmentation of the Palestinian Territories into various zones with various levels of Palestinian control, the Israeli settlements dotting the whole West Bank, as well as the West Bank-Gaza split as the most serious obstacles to the establishment of a viable Palestinian state.

Mr. Felix Dane went on to present the activities of KAS Ramallah, which aims to contribute to the overall economic, socio-cultural and political development in the Palestinian Territories. Among others, Mr. Dane introduced the cooperation with the Bethlehem University in the field of education in public administration. Through various channels, KAS Ramallah addresses the Palestinian technical, political and business sector and academia, and thus contributes to the development of the Palestinian civil society. Nevertheless, empowered civil society presents a pretext for country’s sustainable and fruitful socio-economic and political development.

The afternoon session was crowned by the presentation of the chief negotiator of the Palestine Liberation Organization (PLO), Dr. Sa’eb Erekat, at the Negotiations Affairs Department in Ramallah. Mr. Erekat elaborated on the two-state solution of the Israeli-Palestinian conflict. Mr. Erekat highlighted the pretexts as well as the current state of the implementation of the solution. He stressed the need to end the Israeli settlement activities in the West Bank and East Jerusalem as well as the Hamas-Fatah reconciliation in order to establish two viable states of Israel and Palestine who wants to live side by side in peace and prosperity.

The last point of the delegation’s programme was a meeting in the Notre Dame Hotel in East Jerusalem, where Mr. Dane delivered his endnote speech. Mr. Dane appreciated the great participation and interest demonstrated by the representatives of the delegation during all sessions. The follow-up exchange of feedbacks of the delegates successfully concluded the visit of the delegation of Axel Springer Academy in the Palestinian Territories.